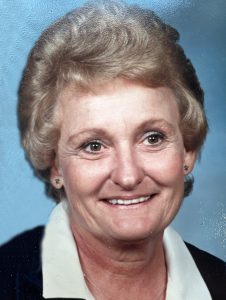 Sally was born in Ogden, Utah on July 8th, 1933 to Louis M. and Sarah (Parker) Leonardi and raised as a Catholic. She grew up working on the family vegetable farm, her favorite was working with the ‘work horses’. She graduated from Ogden High School in 1951.  Afterwards, she completed her education in Nursing at Weber College.

Sally married the love of her life, Stanley Franklin May Sr., on February 8th, 1958 in Ogden, Utah. They started their family in Little Valley, Utah while Frank worked on the Causeway and had their first child, Frankie. They then moved to Honeyville and expanded their family where they raised two more boys Stevie and Jimmy.

Mom wore many hats while being a homemaker and utilized her nursing skills with 3 rugged boys. She was part of Elaine’s “Apple Picking Gang” with many Honeyville friends. Sally was the Office Manager of Frank May Ski-Doo that she and her husband, Frank, started in 1968. Her most dedicated and loyal job was being a “Stay-At-Home Grandma” and was known as “Yia Yia” by her great-grandkids. She enjoyed taking them on ‘Jezebel’ her 4-Wheeler.  She loved her many dogs, horses, and stray cats.

Sally was a 4-H Leader with her sons, Frankie and Jimmy, as well as grand-daughters, plus a handful of bonus grandkids. She received a well-deserved award, 4-H Leader of the Year in 1992. She spent many years in a bowling league with some of her life long best friends, Dixie and Shannon. The ‘Three Amigos’ would do everything together, from a simple trip to get Diet Coke to big adventures to numerous to list. She loved spending time with her friends and family in Lava Ranch where she and Frank built their cabin from ground up. She spent a lot of the time watching her kids and grandkids through the lens of her video camera creating an atrocious amount of memories.

A private viewing will be held at Rudd Funeral Home in Garland, Utah on July 15th, 2022.

The family would like to give a ‘Special Thanks’ to Maple Springs Assisted Living where she had resided for 8 years.