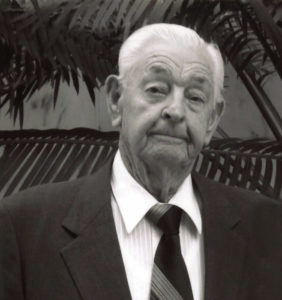 Richard was born on May 12, 1925, in Willard, Utah, to William Wallace and Ethel Mae Brunker Jeppsen.   They moved to Mantua, Utah when he was three days old.

He attended elementary school in Mantua and went to Box Elder High until he joined the Navy in 1943.  He proudly served our country in WWII on the battleship UUS St Louis as a Fireman First Class working with the ammunition. His fleet was in attendance, as the Japanese forces surrendered in Tokyo Bay on September 2, 1945.

He met his forever sweetheart, Zelma Payne, while home on leave, waiting for his ship to be repaired. They were married after he returned from the war on May 29, 1946 in the Logan LDS Temple.

They started their lives together around the Seattle, Washington area working for Boeing.   Shortly after his marriage his father-in-law became sick and they moved back to Mantua, Utah to help take care of him.

Richard was employed by WW Clyde and later Hill Air Force base until he retired in 1979. Following retirement, he spent a lot of time traveling with his wife.   He took odd jobs here and there, Hansen Motors, Waste Disposal, and Sherwood Hill Golf Course, but spent most of his time on his one true love GOLF.  He got his first and only hole in one September 2, 2007 at Logan Country Club Golf Course.

He belongs to The Church of Jesus Christ of Latter-day Saints, Mantua 1st Ward.

Private family graveside services will be Friday, January 8, 2021 at 11:00am at the Mantua Cemetery with Military Honors Accorded.

Those wishing to view the live stream of the Services, use this link https://m.facebook.com/pg/mortuarymyers/videos/ and locate Richard’s livestream in the video section.