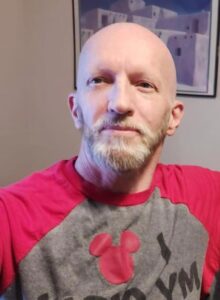 Patrick Vaughn Zook, 58 of Preston passed away Monday, August 9, 2021, at his home after a valiant battle with cancer. Patrick was born on September 28, 1962, in Logan Utah the son of Joseph and Roberta Schumacher Zook. Patrick spent several years in Hyde Park then moved to Franklin where he attended and graduated from Preston High School. He also attended college at Idaho State University.

Patrick married Cindy Ann Zook on December 5, 1986, in Franklin Idaho at the the home of Uncle Eddie and Aunt Kathy Chatterton’s house. Patrick and Cindy are the proud parents of four children. They made their home in Preston where Patrick served in many capacities in the community including a volunteer firefighter, EMT, and Search and Rescue. He worked as the Bakery Manager at Stokes Marketplace until his illness prevented him from working. Patrick was also, a Black belt in Karate and was the owner of the Rex Kwon Do Dojo, the Dojo featured in the local Napolean Dynamite movie.

He was preceded in death by his parents and one brother Duane Zook.

Graveside funeral services will be conducted at 11:00 am. on Saturday, August 14, 2021, at the Preston Cemetery.

Funeral arrangements are under the direction of Franklin County Funeral Home.

In lieu of flowers, the family would graciously appreciate donations be made to assist with funeral expenses. Donations can be made directly on the Franklin County Funeral Home Website or by following this link. https://www.franklincountyfuneral.com/payments
Please be sure to note donations for Patrick Zook.