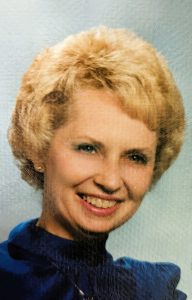 Merry Ellenor Geis Harrold, 84, passed away on July 10th in Preston Idaho.  She was born to Paul Davis and Ellenor Adella Close on October 27, 1937, in New Philadelphia, Ohio.  She was the oldest of 4 children.  She met Richard Harrold while attending college at Central Michigan University and they were on August 29, 1958.  They were married for over 63 years.

She lived with her Aunt and Uncle in Frankfurt, Michigan, during her junior and senior year of high school graduating a year early in 1954.  After graduating from college Merry taught math for her entire teaching career beginning in Michigan and retiring from teaching in California after 39 years.  She was always looking for ways to improve math and make it more meaningful and more enjoyable for her students.  After retirement, they build a home in Fairview, Idaho, and moved to be closer to the grandkids and their activities.

She was a member of the Presbyterian Church and had many callings there.  As a member of the Knit Wits she helped create many baby blankets, and lots of baby clothes to be donated to those in need.  She loved to sew and especially loved her grandkids who were the highlight of her life.  She was also a lifelong member of the National Council of Teachers of Mathematics.

She was preceded in death by her parents, a sister, and a brother.

Memories and condolences may be shared with the family at webbmortuary.com   .