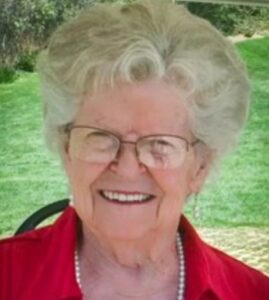 Marilyn Jensen Lindley Hopkins, 89, passed away on December 2, 2021, surrounded by loved ones at her son’s home in Springville, Utah due to complications from cancer. Marilyn was born on May 11, 1932, in Hyrum, Utah to Einar and Beulah Jensen. She attended elementary school and junior high in Hyrum and graduated from South Cache High School in 1950. While at South Cache, she met Earl Lindley, and they were married on October 11, 1951, in the Logan Utah Temple. Marilyn and Earl lived in Edmonton, Alberta, Canada, Hyrum, Utah, Idaho Falls, Idaho, Provo, Utah, and eventually they settled in Smithfield, Utah where they resided for more than forty years while raising their family.

Marilyn was a caring and devoted wife, mother, and member of the community. She served for 17 years on the Smithfield City Planning and Zoning Commission. She loved to cook for her family, including frequent and delicious baked goods. She decorated many beautiful birthday and wedding cakes for family and friends. She was talented as a seamstress and an artist, enjoying tole painting and other crafts including handiwork by making baby bibs, scrubbies, dish rags, and hangers, all of which she loved to give to her children, grandchildren, and friends. She was crocheting hangers until the last few weeks of her life. She also kept detailed family history records that are a blessing to her posterity.

Marilyn was an active member of the Church of Jesus Christ of Latter-day Saints. She served as Relief Society President of the Smithfield First Ward, in addition to numerous other callings. She has a strong testimony of the Savior and His Atoning Sacrifice. She and Earl served a proselyting mission in the New York Rochester Mission. Marilyn was exceptional at remembering names and birthdays of not only her immediate family, but also of extended family and friends. She is kind, compassionate, and always thought the best of others even if their actions were hard to understand. Her children remember their mother, when speaking of others who had made poor choices, sincerely saying, “they meant well.”

After Earl died in 2012, Marilyn moved to North Logan to live near her daughter. While there she made many wonderful friends just as she did in each place she lived. In late 2019, she met Loyal Hopkins and they were married on March 7, 2020, and moved to Utah County. Marilyn was happy to have met Loyal as their companionship helped her overcome the loneliness she had felt after Earl’s passing.

She was preceded in death by her husband Earl, her parents, a brother, Gary, a son, Blake, three grandchildren, and a great grandson.

Funeral services will be at held at noon on Saturday, December 18, 2021, at White Pine Funeral Services, 753 South 100 East, Logan, Utah and will be streamed over the internet.

Burial will be in the Hyrum City Cemetery.

Condolences may be sent to the at www.whitepinefunerals.com.