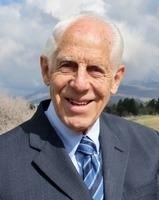 In John Leon Sorenson, Utah has lost a teacher, scholar, saint, father, and iconoclast. Throughout his life of over 97 years, he had enough substance of mind and spirit to resist easy and superficial views and was able to explore richer perspectives, which he passed on in his life and writings.

Born in 1924, he grew up in Smithfield, Utah, a Mormon farming community. His parents taught him that his path to success would be through education. He excelled in school and studied electrical engineering at the Utah State Agricultural College (now Utah State University) in nearby Logan. After Pearl Harbor, he started Army Air Corps training as a weather forecaster (at the University of New Mexico and the California Institute of Technology). Forecasting weather taught him that science, although useful, has limits. He served in Brazil, and left the service in 1946, returning to Logan, where he met and married Kathryn Richards.

Inspired to serve a mission for the Church of Jesus Christ of Latter-day Saints, he was sent to Rarotonga in the Cook Islands, where he mastered the language (writing a grammar) and learned to observe and respect that people’s culture. That island experience shifted his scientific interests from the hard sciences to the social sciences. After returning to Utah, he began studying anthropology and archaeology at Brigham Young University (BYU). He received a master’s degree in archaeology in 1952 (adding to his master’s in meteorology from Caltech). In 1953, he worked as an archaeologist in southern Mexico with the New World Archaeological Foundation before becoming an instructor in archaeology at BYU. He received his PhD in anthropology from UCLA in 1962. His work applied the methods and concepts of anthropology to contemporary societies and groups, including Mormon culture.

Meanwhile, the family that John and Kathryn had started as a young married couple before his mission, was growing. Eight sons were born by the time John began as a professor at BYU. After a couple of years in Provo, the family landed in Springville, where Kathryn raised kids and followed her creative interests while John built up the social sciences at the Y.

When the Vietnam War ramped up, the Sorenson family moved to Santa Barbara, California for five years where John was head social scientist at a think tank (General Research, GRC) studying the war. He traveled to Southeast Asia a number of times, writing reports on social and cultural patterns in the war zone.

While in Santa Barbara John and Kathryn were blessed with the addition to the family of their daughter, Stacy. First a foster child, then later adopted, she was the single girl in a gaggle of boys and changed everyone’s lives.

John returned to BYU where he later became the head of the anthropology program, and worked on the general education curriculum, before retiring in 1986. After retirement, he continued to work on his research interests, publishing numerous influential articles and books.

Core to John’s approach was the joining of religious and scientific views. While the Book of Mormon is a religious book, he demonstrated the value of studying it as an artifact, using anthropological techniques. In this research program, he meticulously re-examined geography, culture, lifeways, plants, warfare, and writing—comparing the Book of Mormon text with what archaeology has to say about Central America over a couple of thousand years. That work resulted in the creation and flourishing of the Foundation for Ancient Research and Mormon Studies (FARMS). He was involved with FARMS for almost 30 years. His life and work proved that productive thinkers can be both scientific and religious.

John served in the Church of Jesus Christ of Latter-day Saints for most of his life, primarily as a Gospel Doctrine teacher in California and Utah, in which capacity he influenced and inspired generations of his fellow saints. He also held leadership positions, including high councilman and bishop. He was a fulltime, stake, or church service missionary for nine years.

Starting in Santa Barbara and continuing through his later Utah years, he participated in a community of LDS academics and artists who valued using a rational, collaborative, and disciplined approach to exploring their religion. They contributed a body of research and writing that spread across the country and around the world. Mormon history could use evidence, these people argued, and examinations of Mormon doctrines could benefit from the analytical tools of philosophers and critics. According to John Sorenson, whether you are more inclined toward religion or science, it is better to be thoughtful than dogmatic.

In 1991, John’s wife Kathryn died. Since 1993, he has been married to Helen Christianson, and lived in Provo, Utah. Thus, his family has been divided between Sorensons (in Northern Utah/Idaho), the Richards relatives (mostly around Magna), and the Christiansons centered in Provo. All of them were vitally important to John.

He was proud of being a family man, a humble believer, a good writer, and a hard worker.

As requested for all activities in LDS church buildings, please wear a mask.

Private Interment Services will be held Monday, December 13, 2021 in the Smithfield City Cemetery.

Major airlines cancel, change flights to US over 5G dispute