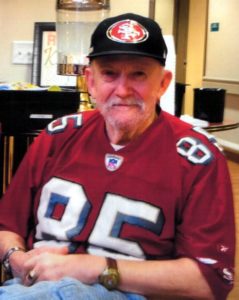 He was born in River Heights to John Shakespeare Davis and Ella Olson Davis. He was the youngest of seven children.

He enjoyed fishing, camping and telling jokes. He worked many jobs in Cache Valley and was a very hard worker. He graduated from South Cache High School and attended Utah State University. He was a loyal Aggies fan.

He joined the Army and was stationed in Hawaii for 18 months as a radio operator. He worked as an iron worker for many years and he also worked as a dietician.

He was a member of The Church of Jesus Christ of Latter-Day Saints.

He was preceded in death by his daughter, Carol Jean; sisters Maureen, Dorothy, Janet, Barbara and his brother, Lee.

The family would like to thank the loving staff at the William E. Christofferson Salt Lake Veterans Nursing Home and special thanks to his roommate, Doug and all of the hospice staff.

There will be a private family service at Valley View Memorial Park.

Condolences and memories may be shared with the family at Dignity Memorial.