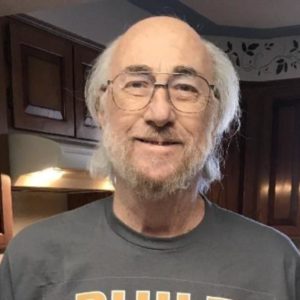 Jeffrey Wayne Watkins passed away on January 2, 2021 at the age of 76 – or 2,399,467,007 seconds – as he proudly proclaimed at family gatherings. Sometimes he would use denominations of minutes rather than seconds.

Jeff was born December 21, 1944 to Arthur and Gertrude Watkins in Ogden, Utah. He was a member of the first graduating class from Clearfield High School in 1963.

Conflict between the US and Vietnam emerged in the early 60s and Jeff registered for the draft as all 18 year old men are required to do. In 1964, Dad was a fire lookout in Salmon, Idaho, where he lived on top of a mountain with a few changes of clothes, his guitar, and 3 weeks’ supply of food.

Dad earned a bachelor’s degree in forestry and graduated from Utah State University in 1967. He went on to Oregon State University in Corvallis to work on a master’s degree but was drafted into the United States Army in 1968 while working as a firefighter in the Mt Hood Forest District. Jeff served active duty in Korea through 1969, and then served 4 years in the Army Reserve. He returned to Utah after an honorable discharge, where he met Donna Thompson.

Jeff married Donna on January 9, 1973. They made their home in Newton, Utah, and as a family man, his first career was a maintenance mechanic at Pepperidge Farm in Richmond, Utah. Jeff and Donna had two daughters, Jessica and Elana. Dad returned to Utah State in the early 90’s to finish the master’s degree he started in the 60’s. He finished a Master of Science in Environmental Engineering and took a job working at Hill Air Force Base in the wastewater treatment plant, and he retired from HAFB’s environmental engineering division in 2004.

Jeff was an accomplished woodworker and made many beautiful items for the people closest to him, including rocking horses, coffee tables, dining tables and chairs, jewelry boxes, charcuterie boards, and more. Dad could fix anything, and he was proud that he didn’t need to rely on others for car and home maintenance. Dad enjoyed spending time talking with other veterans, solving cryptogram puzzles, soaking at Crystal Hot Springs, and helping Mom participate in craft fairs. In his younger years, Jeff spent a lot of time hiking, hunting, fishing, and being outdoors in Logan Canyon and the surrounding areas. He couldn’t wait to be in mountains.

A celebration of life will be planned and held later when it’s safer for friends and family to gather.