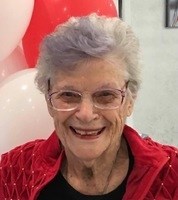 Jean was born November 18, 1925 in Lynn, Maine to the late Vincent and Beatrice (Gaddis) Messina. Jean was a graduate of Lynn English High School and Burdett College.

She worked at General Electric in Lynn and Packard Car Company in Boston. At GE, she met Vincent Gabriel DeNunzio. Vin and Jean married in 1946 and moved to Coeur d’Alene, Idaho. This marked the beginning of their many adventures together, which included living on a Pueblo reservation in Santo Domingo, New Mexico and in 1955 settling in Brigham City, Utah. Jean and Vin resided in Brigham for 21 years, raising 4 children and making lifelong friends. Jean was a parishioner of St. Henry’s Church and an active member of the Women’s Guild.

In 1976, Jean and Vin moved their family to Wichita, Kansas, where Jean became President of the Altar Society at St. Thomas Aquinas church and enjoyed delivering Meals on Wheels. In 1980 Jean and Vin officially retired, and after a stay in Florida settled in York, Maine for 30 years.

A devoted Red Sox fan, Jean loved to attend games at Fenway Park with her son Peter. She enjoyed entertaining family and friends, and was a constant source of strength and caring for Vin. While in York, Jean also volunteered for Hospice. A highlight of her retirement was a 7,500 mile car trip with her best friend Dorothy Dow. At 80 years old, adopting the names “Thelma and Louise”, they traveled from Maine to Washington state and back, revisiting friends and places from their past. Jean later referred to that experience as one of the greatest of her life.

Jean is preceded in death by her husband Vincent Gabriel DeNunzio. She is survived by son Peter Vincent DeNunzio and his wife Cynthia of Palm Harbor, Florida, son Steven Peter DeNunzio and his wife Judith of Tarpon Springs, Florida, son Michael Anthony DeNunzio and his wife Patricia of Toluca, Mexico, and daughter Ann Marie Durlacher and her husband Stanley of Boston, Massachusetts. She is also survived by granddaughter Karen Garufo and husband Stephen, grandson Dustin DeNunzio, grandson Dominic DeNunzio and wife Vanessa, granddaughters Emily and Grace Durlacher, and great-grandchildren Stephen Peter, Anna, and Gabriel Garufo. Jean is also preceded in death by her brothers Vincent Messina, Donald Messina and Carl Messina, and sisters Rita Bettinger, Phyllis Ciccolo and Joan Caulfield. She is survived by her sister-in-law Margie Messina and many nieces and nephews.

Many heartfelt thanks to Suncoast Hospice of Palm Harbor, Florida for such skilled and compassionate care.