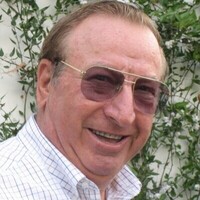 He lived nearly all his life in McCammon, Idaho and spent a great deal of his youth with his grandfather, George Chester Romriell. He loved the outdoors and early in his life learned to fish, hunt, and trap.

After graduating from North Marsh High School in 1954, due to an intense fascination with Alaska, Dad applied for and took a job with Pinnell and Talifson, who were famous bear guides on Kodiak Island. After working one summer, he decided to serve a mission for The Church of Jesus Christ of Latter-Day Saints and was called to serve among the Navajo in the southwest United States. Upon returning to Idaho, he continued his college studies at Idaho State University. He continued to return to Alaska for several more summers to help pay for his schooling.

After completing college, he met the love of his life, Anita Harris. He “slipped a diamond ring on her finger” and they were sealed for time and all eternity in the Logan Temple on June 26th, 1964.

As a member of the Church of Jesus Christ of Latter-Day Saints, Dad served in various callings and was very faithful in attending his meetings even as his health was failing him.

Dad taught 7th and 8th grade students in McCammon for nine years. He coached the basketball and track teams which were very successful. Dad earned his Master’s Degree and was the principal at the elementary school in McCammon for 25 years.

Dad and mom hunted and fished together for many years. Dad loved trapping as well and had a small business, Sam’s Trading Post, where he bought and sold raw furs.

Dad was preceded in death by his parents, his wife Anita, his son Steven Todd (stillborn), and his granddaughter Adelyn (stillborn).

Viewings and the funeral service will be held at the McCammon LDS Stake Center.

A viewing for friends and family will be held Wednesday evening, August 4th, from 7:00 to 8:00. Additionally, a viewing will precede the funeral services beginning at 10:30.

Funeral services will be held at noon on Thursday, August 5th.