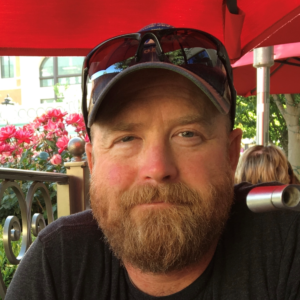 This world lost one of the greatest guys its ever known. It’s hard to summarize Chad’s journey into a few paragraphs. He was a helper to all, the perfect husband for Vai, a son, brother, best friend, stepdad, grandpa, and decorated police sergeant. His unique life began on January 3, 1977 in Montpelier, Idaho. He spent some of his first years in Grace and Malad, Idaho and settled in Brigham City at a young age. He attended Central Elementary and graduated from Box Elder High School in 1995.

In his younger years he had adventures with countless friends. He spent seven years as a life guard and swim instructor at the Brigham City Pool where his life-long love for water began. His love language was service, and he was always willing to help anyone out with anything. There is probably not a friend or family member he hasn’t done a home improvement project for, expecting nothing in return. He was known for his witty jokes, wry sense of humor and could tell a story better than anyone. He loved to grow crazy beards and mustaches and was always trying out a new style.

Chad joined law enforcement in 2002, spending 18 of those years with the Brigham City Police Department. While there, he served on Bike Patrol, SWAT Team Leader, Detectives, Field Training Officer, and as a Sergeant on Patrol. He was also a Firearms Instructor for the Weber State Police Academy, a member of the Box Elder County Sheriff Search & Recovery Scuba Team, where he served as President for 2 years. He was a mentor for many young officers who looked up to him. Many brothers and sisters in blue have become life long friends and this tragic loss has left huge a hole in their department and hearts.

In early 2006, he met the love of his life, Vai, when some mutual friends set them up on a blind date. They began a beautiful adventure-filled journey together, experiencing more in 15 years than most people do in a lifetime. Chad proposed to Vai while they were laying in a hammock on the beaches of Bonaire. In the summer of 2007 they were married under Delicate Arch, outside of Moab, Utah, surrounded by their close friends and family. They worked hard and they played even harder. Their adventures took them to many countries where they pursued their passion of scuba-diving and exploring the world. They enjoyed Harley rides together with their fun loving, zany gang of biker friends. He enjoyed pickleball tournaments and gained many friends through that community. He always had to have a project to work on, and was like the Energizer Bunny, a very hard worker.

Chad was a wonderful step-father. He helped raise Vai’s boys from a very young age, and they enjoyed many adventures together, including four wheeling, fishing, wrestling and horse-playing. He delighted in being a grandpa to Grayson who called him “PapaChad.”

Chad was a member of the Church of Jesus Christ of Latter Day Saints, served a mission in Boston, Massachusetts, and served in many church callings, often working with the scouts.

He was preceded in death by his mother, Ilean Panter, a nephew and his favorite dog, Toby.

Chad is survived by his devoted wife, Vai; stepsons Josh, Cameron and Jared. He also embraced and cared for Vai’s daughter Sarah, son in law Stanton (Victoria) Lougy and grandson Grayson. His father Eddie, Sisters Gina (Dominic) DeSantis, Kristin (Mark) Ellis, Tami (Todd) Crook, brothers Jake (Jaylynn) Panter, Brett Panter, and many nieces and nephews. Chad was an honorary member of the Bywater clan, with Craig and Janeen often introducing him as “their OTHER son Chad.”

Viewing services will be on Tuesday August 3rd at Gillies Funeral Chapel from 5:00-8:00 pm followed by a viewing Wednesday August 4th at the Willard South Stake Center 10:00-11:30 am.

Vai wishes to give her deep thanks to Chad’s law enforcement family, friends and community who have assisted in so many ways to help carry her through this difficult time.

Click this link to view additional details about Chad’s Services, including any available live streams: https://my.gather.app/remember/chad-dean-panter