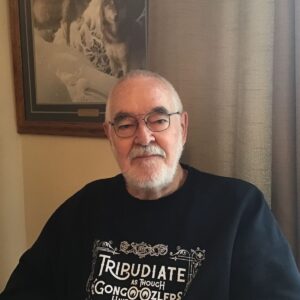 It is with heavy hearts and eternal hopes that we say farewell to our husband, father, brother, and grandfather, Eric Harold Read. Eric was born April 2nd, 1941, in Lincoln Nebraska, and crossed the bridge on November 17th, 2021. The first of eight children born to Harold and Mary Read, Eric would spend the first four years of life with his mother and grandparents while his father was serving his country in the Pacific Theater. From Nebraska, the small family moved to Pocatello and Harold and Mary got busy providing Eric plenty of siblings for him to look after.

Eric graduated from Pocatello High School in May of 1959, and then the next day joined the United States Army. He would spend the next 20 years serving his country in the United States, France, Germany, Italy, and two tours in Viet Nam. He retired from the Army in 1979 as a Sergeant First Class and spent the next 21 years working for the United States Postal Service.
Eric married Carolyn Chase in 1969. They wasted no time bringing five boys into their family: Stephen, Christopher, Adam, Jared, and Daniel. Carolyn passed away in 1998. Eric found the second love of his life in Grace McClellan, and they were married in March of 2000, at which point he moved to Brigham City Utah.

Eric and Grace spent several years working with the Box Elder School District to administer reading assessments to students K-5 and to second language learners. He was a true lover of books and poetry and was a member of the Utah State Poetry Society for several years. He also was deeply devoted to the Church of Jesus Christ of Latter-Day Saints and gladly accepted and fulfilled many callings in that regard.

Eric was preceded in death by his brother Steven, his dad and mom, his first wife, Carolyn, his sisters Susan, and Kris, and his son Adam.

Click this link to view additional details about Eric’s Services, including any available live streams: https://my.gather.app/remember/eric-harold-read