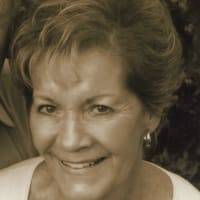 Edris Blanche Frodsham Johnson, passed away peacefully in her sleep on May 26, 2022. She was born in Brigham City on June 13, 1940, to Verland Jay and Blanche Frye Frodsham, the youngest of five children. She was raised in Brigham City where she attended grade school and graduated from Box Elder High School. She excelled in typing and attended many competitions. She was Secretary of the Senior Class and active in the B’Etts. She was a very good softball player and belonged to a competitive league. She was speedy around the bases and could hit the ball farther than you would expect for how little she was. Eddie worked at Thiokol for ten years as a secretary for the general manager until she started her family. She met Darrell Johnson at a dance in Logan and they started dating. They were married on January 31, 1964 in the Logan Temple and had a beautiful life together. They were married for 58 years. They had three wonderful children, which brought forth 11 grandkids and four great grand kids.

Eddie had many talents. She sang in a choir and could play the piano. She was a great seamstress and made many clothes for her family. She was a wonderful homemaker and made lots of bread, and canned pickles, jams, and peaches. “Eddie’s spaghetti” was famous all around. She would always say she was “going to curl up to a good book. ” Tom Clancy and John Grisham were favorites. She was a whiz at crossword puzzles. She stayed in good shape jumping rope and working in the yard. She loved to go camping and 4 wheeling. She had impeccable handwriting and had very good grammar. She was a tireless bundle of energy who greeted everyone with a big smile and a hug. She had a great laugh and always took great care of herself and her family. Eddie was a wonderful example of kindness, an amazing mother and loving wife. Eddie worked at Peterson’s Funeral Home where she did secretarial work and was the organizing queen. After Gillies’ bought Brent asked her to stay.

She was a faithful member of the LDS Church and held many callings. She taught young women and later printed the ward paper for many years until her health started to fail. Her faith was very important to her and it showed in the way she raised her family.

She is survived by her sweetheart, Darrell; their three children, Ann and (Kip), Craig and (Catherine), Lori; 11 grandchildren and 4 great grandchildren; sister, Arlene; brother, Dave and (Joyce), and sister in law Sharon and (Tom) and their families.

She was preceded in death by her parents; two brothers, Wayne and Thomas; nephew, JD; her mother and father in law, Don and Ada Johnson; brother in law, Kenneth Allen, and other aunts and uncle. The family would like to thank the hospice nurse Jody Jones and Mandi Harward from BeeHive and all her staff.

You may leave condolences to the family at www.gfc-utah.com.

Click this link to view additional details about Edris’s Services, including any available live streams: https://my.gather.app/remember/edris-johnson