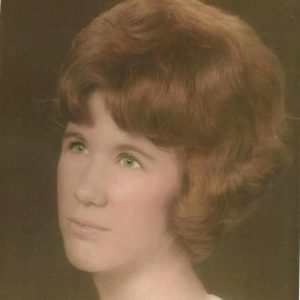 On the morning of August 3rd, 2022, Christine Arave-Adams, age 75 returned home to our father in heaven. She had been residing at Sunshine Terrace Skilled Nursing Facility and passed away of causes incident to age. She was a long-term resident of Lewiston, Utah.

Christine was born to Dean and Verna Arave in 1947, in Salt Lake City, Utah. She studied and practiced multiple forms of dance including ballet and tap. She graduated from West High School in Salt Lake City, in 1964. After high school she married Lloyd Adams and together they had eight children to which she devoted her life.

Christine was an avid seamstress in her spare time and was most known for the doll cloths she made. When she wasn’t sewing, she enjoyed spending time with her children, grandchildren and playing video games.

Christine is preceded in death by her father, Dean, mother Verna and her twin daughters Heidi and Holly.

She is survived by her husband, Lloyd, and her six living children and their spouses, Jeremy (Janna) Adams, Codie (Mason) Stevens, Caleb (Lincee) Adams, Anne (Brad) Winder, James (Jessica) Adams, and Michael Adams, along with 12 grandchildren.

A graveside memorial service for the family and close friends will be held in Parowan, Utah on Saturday, August 6th, 2022, at 1pm MST.

The graveside service will be broadcast via the following link:
https://us02web.zoom.us/j/89173167910?pwd=QUhUcWUzNWlOQ3BVZFFnMlNXSFhPQT09