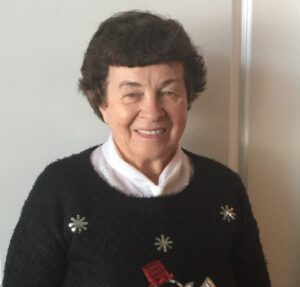 Our dearest beloved mother, grandmother, sister, aunt and friend, Carma Hunsaker Davis unexpectedly died and returned to her Heavenly Father on Wednesday, November 10, 2021, at her home in Perry, UT, and we will so very much miss her never-ending kindness, hard-work and service to others.

Carma was born on May 29, 1938, to Fred and Avis Edwards Weeks in Vernal, UT. She was raised in Vernal where she attended elementary, junior high and high school and helped with the family store, Fred’s Market Place. She was the oldest of four siblings and learned early to work hard. She went on to attend Utah State University. She married her loving eternal companion, Curtis B. Hunsaker, on August 28, 1957, in the Salt Lake Temple and they raised their family of six children together for 46 years. He preceded her in death in 2003, leaving her brokenhearted. She married Doyle Gene Davis on April 30, 2005 and moved to Park City, where she found many good friends. He preceded her in death in 2015.

As a faithful member of The Church of Jesus Christ of Latter-day Saints she served in many ward and stake callings, including: ward organist, president of many auxiliaries of the Church, stake camp director, primary pianist and ministering sister. She served many missions including: Vernal Temple Baptistry, Palmyra New York, Martin’s Cove, Park City Family History Center, Heber Valley Girls Camp, Nauvoo Illinois Church History Site (including Carthage Jail), and performed in the Nauvoo Pageant. She also served a stake mission in the Vernal Stake indexing program with the inmates at the County Jail.

Carma was a modern day pioneer, doing everything with zeal and a joyful attitude. While her hobbies in life included cooking, canning, and tending to her vast garden, her passions were in playing the accordion and piano, sewing many thousands of sun bonnets, camping with her family and doing service for others. She did this to the very last day and was very independent, doing her own yard work and doing everything fast! She was a busy body that amazed all that knew her.

She continually brought happiness and enjoyment to many through her love for others and by her musical talents throughout her life. It brought great joy to her in doing temple and family history and provided saving ordinances for thousands of ancestors. Her deepest love and what she lived for were her children and her grandchildren. You never went to her house without getting fed and being offered a “sandwich” or something to eat.

She was preceded in death by her sister Mella (Dan) Bedell.

A live stream of the service may be viewed on her online obituary and where condolences may be sent to the family at www.myers-mortuary.com.