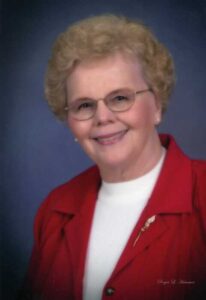 Our loving wife, mother, grandmother, great-grandmother, sister, and friend passed away peacefully on Saturday, May 22, 2021, at Ogden Regional Medical Center in Ogden, UT. She was born August 7, 1933, in Spanish Fork, UT, to Jack and Phebe Jex Swenson. She was raised in Spanish Fork, UT and has been a resident of Brigham City for the last 66 years.

She attended Spanish Fork Public Schools and graduated from Spanish Fork High School in 1951. She graduated from BYU with a bachelor’s degree in Business Education. She had the opportunity to serve as the Vice President of the Class of 1955. In 1957 she received a certificate for Elementary Education. She served on the BYU Alumni Board of Trustees.

Barbara married the love of her life, Austin Reed Burke, in the Salt Lake Temple on June 3, 1957, and to this union they were blessed with four children; Alan, Marianne, Susan, and Paul.

She was a member of the Brigham City Women’s Civic Club for over 50 years and she was secretary to the State Vice President. She received Mother of the Year award for Box Elder County in 2008, and was Nominee for Mother of the Year from the State of Utah. She was involved with the American Legion Auxiliary and participated in delivering Meals on Wheels with her husband for 19 years.

Barbara enjoyed cooking, baking, (she was known as “The Cookie Lady” to many in the neighborhood) tatting, knitting, reading and traveling. She and Reed had the opportunity to travel to all 50 states and Canada as well as Paris France, Australia, the Caribbean, New Zealand and Mexico. Her favorite pastime was spending time with her grandchildren and great-grandchildren.

She was preceded in death by her parents, brothers: Jack J. Swenson and David (Deanna) Swenson, and sister-in-law Sydna Swenson.

She will be in our hearts daily until we meet again. For now, we take comfort in knowing she has rejoined her many family members including her father and mother and two brothers. We can only imagine the joy of this reunion and celebrate her life and the legacy she leaves behind.

The family would like to give special thanks to extended family, friends, and neighbors for their love and support. Also, the Brigham City 13th Ward for their compassionate service.

Online condolences may be expressed at www.myers-mortuary.com.