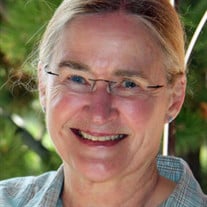 Robyn Daines, an arrestingly wise and beautiful woman of quick wit and droll retort, took the high road out on May, 22, 2021, with the dignity and grace in which she lived her 73 years.

In Grace, Robyn enjoyed the idyllic life of small town America, having the run of the town with her friends and cousins. Clever and bright, she skipped the second grade and read nearly every book in the Grace Library by the time she was 12.

Robyn fell from Grace at 13, moving to Logan, where she graduated from Logan Junior High and Logan High. During her teen years, she worked summers alongside her father and grandfather in the Grace National Bank. She also anchored the ticket booth at the Cache Drive-in Theater. Robyn graduated in 1970 from Utah State University, where she majored in English literature, was honored as a Sweetheart of Sigma Chi and won plaudits and awards as an accomplished poet.

She excelled as a perceptive and meticulous editor. And she relished and was skilled at lively conversation, taking a genuine interest in people, ever willing to listen.

Robyn believed in equality, the Golden Rule and, thanks to the wisdom of her father, that responsible people respond!

In addition to her refined sense of humor and keen awareness, Robyn had many talents. She was a knitter of fine socks and caps and exquisite sweaters. Robyn and her sister, Lane, were, in the 1970s, among the first women in Cache Valley to crack the gender barrier in the weight-lifting room. And she tied beautiful fishing flies, built fine fly-fishing rods and caught and released trout. She often fished with no fly, preferring the simple poetry of casting her line, waist-deep in a meandering stream beneath an umbrella of blue sky and billowy white clouds.

Robyn was a founding member of the formerly clandestine Terra Klenza Highway Cleanup Society on China Row in Logan Canyon. She was a proud member of the 99th Infantry Division Association, in honor of her father, Rex, who served in the 99th Infantry during World War II’s Battle of the Bulge, and in solidarity with her Belgian ‘brothers,’ Jean-Philippe Speder and Jean-Louis Seel, known as the ‘Diggers.’ The Diggers, along with Rex and several veterans of the 99th, collaborated to recover remains of a dozen 99th soldiers Missing in Action during the Bulge.

She was preceded in passing by her sister Lane Drage (Jeff), Monument, Colorado.

A celebration of Robyn’s life and legacy will occur at a time of normalcy and comfort.

We thank family and friends for their kind thoughts and deeds in Robyn’s time of need. And these stalwart caregivers: Meagan Siler and her staff and aides at Legacy House of Logan, Intermountain Hospice and Dr. Robert Nash – all compassionate and caring in guiding Robyn in her waning days.

In lieu of flowers or other material tributes to her life, Robyn asks that you hug someone you know and tell them you love them, without delay. Then donate generously toward research tackling the scourge of Alzheimer’s disease, www.alz.org/donate.