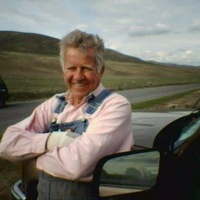 Andrew Robert Bybee, 86, passed away at home on August 17, 2021, due to age-related illness. Andy was born on January 19, 1935, in Soda Springs, Idaho. He was named after his grandfather Andrew Romero and was the third of four children born to Orson Sirren Bybee and Faunda Gweneviere Romero. He grew up on the ranch in Meadowville, north of Soda Springs, and always liked to say that he attended grade school in Meadowville, but that it wasn’t a one room school… just that one of the two rooms was boarded up. He attended Soda Springs High School and graduated from Logan High School. While he was attending USU, he met his sweetheart, Vera Patsy Roderick, through their older brothers. He and Patsy were married on May 27, 1955 in the Logan temple. They became parents to eight children.

They lived in Malad, Soda Springs, Salt Lake, Logan, and Jerome throughout their 66 years of marriage. Andy attended Utah State University where he graduated with a degree in Psychology and minors in Chemistry, Zoology, and Pre-Med. He taught school/counselor, worked as a chemist/lab tech, payroll accountant, and farmer (raising barley, hay, cows, and kids).

As a member of the Church of Jesus Christ of Latter-Day Saints, Andy served in many callings. He enjoyed traveling and partnering his wife in square dancing. He also loved telling stories about his family history and discussing any topic with anybody.

Interment will be in the Pleasantview Cemetery. See www.horsleyfuneralhome.com for dates and times.

The family wishes to express appreciation to the hospice nurses and caregivers who showed great patience and tenderness with Dad during the past several months, especially Courtney, Brittny, Missy, and MaRee.