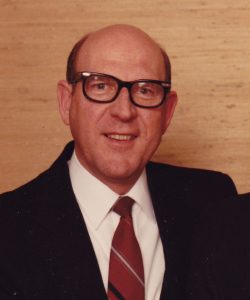 Bill McFarland passed away peacefully at home in Bountiful, Utah on February 15, 2021.

Bill often said, “death will be a marvelous and joyful adventure.” Then teasingly would add, “I can hardly wait to get there. But I’ll delay it as long as I can because there is so much work to do.” Bill’s delay is over and he has now begun the marvelous adventure he never feared.

He was born in Logan, Utah October 24, 1932, and raised there as the fourth of six children of Merrill Robert and Naomi Jensen McFarland. His siblings are Bob, Loa, Jack, Larry, and Christie. All but Larry and Christie have preceded him in death.

Bill served his God, his country, and his fellow man. Bill served in the Army during the Korean War. Bill’s church service included a full spectrum of callings and he cherished his many years as a sealer in the Bountiful temple.

In 1972 Bill was named “partner-in-charge” of the Spokane, Washington office of the international accounting firm Ernst & Ernst. Three years later Bill was invited to return to Utah to direct the worldwide auditing activities of The Church of Jesus Christ of Latter-Day Saints. He accepted, telling his Ernst & Ernst associates that “his church” was the only organization that could draw him away from his formal CPA career.

Bill served 23 years as managing director of the Church Auditing Dept., characterizing his experiences at the Church as “a very satisfying part of my professional career, and a period of continued personal growth.”

Bill was devoted to his wife Glenda and their children and grandchildren, and to his church. He was simple in his wants, ordered in his ways, and oriented to service and work (preferring those activities to leisure, travel, etc.).

Bill’s family, his church, and his knowledge of and commitment to the doctrines of Jesus Christ were always his most prized possessions.

Funeral services will be live streamed, Friday at 11:00am and may be viewed by clicking here.

Condolences and memories may be shared with the family at Russon Mortuary.