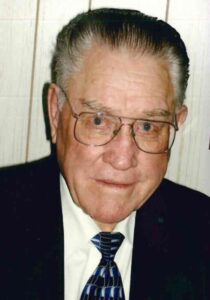 Wayne D Johnson, beloved husband, father, grandfather and friend, passed peacefully on May 27, 2021 of causes incident to age. Born on the 27th of April, 1926 to Ezra Abraham Johnson and Viola Christena Peterson in Ovid, Idaho, he was the youngest of three children. He attended Ovid Elementary and graduated from Fielding High School. He also played on the Ovid baseball team. Wayne was drafted into the Army and served for a period following WWII. Following his military service, he was called as a missionary for the Church of Jesus Christ of Latter Day Saints in the Samoan Mission, serving most of his time in the Cook Islands. He was sealed to his sweetheart Julia Annis Kearl for time and eternity on June 10, 1964 in the Logan Temple.

Most of Wayne’s career was spent at Monsanto in Soda Springs as a Maintenance Mechanic. He also managed his family farm, raising beef cattle and putting up hay. He was a skilled welder and metal worker and enjoyed spending time with family cutting firewood, hunting, fishing, and going on annual vacations. He was an active member of the Church of Jesus Christ of Latter-Day Saints throughout his life and faithfully served in a number of Church callings including Bishop, High Councilor, Stake Presidency, Region Welfare Agent and Patriarch. Later in life Wayne and Julie served as senior missionaries in the New Zealand Auckland Mission. During this time Wayne had the opportunity to give hundreds of patriarchal blessings to the Moari people in the Cook Islands, where he had previously served.

Wayne was preceded in death by his parents, his sister Mona and brother Weldon.

Funeral services will be held Friday, June 4, 2021 at 12pm in the Liberty ward meetinghouse.

A viewing will be held prior, beginning at 10:30am.

Interment will be at the Ovid cemetery. In lieu of flowers please make donations to the Church of Jesus Christ of Latter-Day Saints General Mission fund.