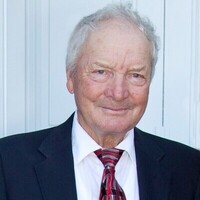 W. Neil Jensen, 89, passed away on May 2, 2022 after suffering a stroke. Neil was a courageous survivor, who passed on his strength, testimony and love of life to his descendants. Neil was born to Emil Ray and Selma Jensen in Logan, January 27, 1933. Neil developed his strong and courageous spirit at the age of six when he stricken Polio and fought his way back to health. He did not let the disease stop him; his mother was his greatest advocate as she helped him walk again and learn to live life to fullest.

Neil was raised on the family ranch in Young Ward, Utah outside of Logan. He worked on the ranch with his family where they grew sugar beets and hereford cattle. Neil was baptized and confirmed a member of The Church of Jesus Christ of Latter Day Saints in the Logan Temple. One day, when he was eight, his mother said it’s time, and she took him to the Logan Temple and had him baptized. No fanfare. He was a faithful member his whole life, serving a mission to Denmark in 1954 for three years. While there, he served as branch president, as well as, proselytizing. Neil served in many callings throughout his life, his favorite was serving with his wife as officiators in the Logan Temple for seven years. Neil married Clara Church, his beloved bride, September 13, 1957 in the Logan Temple. They lived in Raymond, ID their first year, and then they moved back to ranch with his brothers in Young Ward, UT. The brothers were well known for their prime breeding herefords they sold at auctions throughout the West. Later, they held their own cattle  auctions on the ranch and buyers would come from all over to buy Jensen Brother Herefords. He took a short break from cattle ranching to earn his Bachelor of Science in Agricultural Business in 1967. In 1994 Neil, Clara, and the three youngest sold the ranch in Young Ward and moved to Samaria to continue building a strong brand for high quality breeding stock with the boys. Neil’s passions were hunting and  fishing, which he was able to do right up to the last. He spent his last weeks on earth fishing with his best friend and son, David, on Kachemak Bay in Alaska.

Neil and Clara raised seven children who love him deeply, honor his memory, and treasure his example of joy in life and love of earth. They appreciated his sense of humor which was evident with the mischievous twinkle in his eye. His children fell for his April Fools joke every year growing up.

He was preceded in death by his wife Clara Church Jensen, his parents Ray and Selma Jensen, and five siblings.

A special thanks to the staff at the Nell J Redfield Memorial Hospital in Malad, ID for their kindness and quick response and the University of Utah Hospital, Neuro Critical Care Team and Palliative Care Unit for their caring, service and compassion