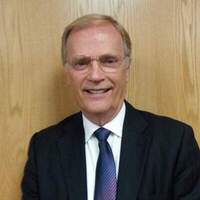 Terry was the son of Virgeul Horace “Red” Lamoreaux and Ruth Croshaw Carlson. He was born in Preston, Idaho on July 31, 1946, and grew up in Downey, Idaho. He attended Marsh Valley High School, where he was named “Most Talented” and “Choir Man of the Year”, attended Boys State, and excelled as a member of the debate team and pep squad. After high school, he was awarded a scholarship to attend Brigham Young University.

At BYU, he was a member of the a cappella choir, and was also selected to be a member of the Mormon Tabernacle Choir during his freshman year. He was called to serve a mission in Norway for the Church of Jesus Christ of Latter-day Saints. He served in Norway for 2 1/2 years, an experience that changed his life. While there, he used his musical talents as part of the Mormonaires, a group of missionaries that traveled the country, performing and sharing their love of music and the gospel. He fell deeply in love with the Norwegian people and culture and developed many close friendships that lasted throughout his lifetime.

Upon returning to BYU after his mission, he became a member of the Sounds of Freedom (which later became the Young Ambassadors.) He also had the opportunity to return to Norway to attend the University of Oslo and work as a tour guide.

It was in Young Ambassadors where he met his sweetheart Marilyn Foreman. They were assigned to stand next to each other in the group. He had blonde hair and she had dark hair and everyone said they went together like “salt and pepper.” Their friendship blossomed instantaneously when Terry informed Marilyn he wanted to marry her and showed her a ring on their first date. In 1970, after a year of courtship, Terry and Marilyn were married in the Salt Lake Temple by Elder Spencer W. Kimball. They were blessed with three wonderful children – Jon, Annie, and Stephen.

Terry worked as a flight attendant and purser for United Airlines for 30 years before retiring in 2003. During his years with United, he had many opportunities to return to Norway, and was even asked to serve as the private purser to the King of Sweden during the King’s trip to the U.S. Terry and Marilyn and their three children experienced a life full of amazing travel and were able to live in many different places, including Chicago, California, Utah, Cambridge, England, Florida, and Colorado, before moving to St. George, Utah in 1999. Eternal and unforgettable friendships were made in each and every place they lived.

Terry also taught private piano, voice, and organ lessons for over 50 years, instilling a love of music into the hearts of thousands of students. He founded and was the conductor and artistic director of both the Northern California Mormon Symphony & Chorus in Concord, California, and the American West Symphony & Chorus in Sandy, Utah. He served as a member of the Board of Directors of the Gina Bachauer International Piano Competition, and the USA/Scandinavian Cultural Exchange, a prestigious program under the auspices of the United Nations. After moving to St. George, Terry attended Dixie State University’s music program, singing with and serving as an assistant conductor of the Southern Utah Heritage Choir.

As a member of The Church of Jesus Christ of Latter-day Saints, Terry served in many different positions, ranging from primary pianist to bishop to the stake presidency. He has also been a ward or stake organist on and off for over 60 years, beginning at age 12 when he served as the ward organist in Downey, Idaho.

Terry is survived by his wife of 50 years, Marilyn Foreman Lamoreaux, and his children Jon (Farrah), Annie (John) Blatter, and Stephen (Alina). He will also be fondly remembered by his nine grandchildren Jacob, Hannah, Alex, Owen, Georgia, Graham, Eddie, Logan and Liam. Terry is also survived by his only sister Jeanne Lamoreaux Jones, and his youngest brother David C. Lamoreaux. Terry adored his grandchildren, and he regretted not being able to watch them grow up, but he was so excited for his sweet reunion with his parents and grandparents.

Terry lived his life to the fullest and was happiest when surrounded by friends and family, especially when playing a rousing game of Five Crowns or Hearts, where he relished proclaiming himself the Eternal Grand Champion. He was always bright and cheerful, an unforgettable force for good, and a light to all who knew him.

A graveside service for immediate family will be held in the Downey Cemetery at 1:00pm on Wednesday, January 6, 2021. A virtual funeral service link will be accessible by clicking here.

All are invited to view online and the family would love to read comments or favorite memories of Terry.

The family thanks the many doctors, nurses, and staff of the COVID section at Dixie Regional Medical Center.

In lieu of flowers, the family requests that you stay safe and treasure every moment with your loved ones. Terry was taken too soon. As he always said, “It’s been a little slice of heaven.