SMITHFIELD — The Church of Jesus Christ of Latter-day Saints has released the exact location of the Smithfield Temple, which was announced in April 2021 by Church President Russell M. Nelson. 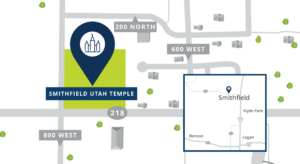 A press release Thursday morning explained the Smithfield Utah Temple will be constructed on a 13.3-acre site at the intersection of 800 West and 100 North. Plans call for a three-story temple of approximately 81,000 square feet.

The temple will be located on a plot of land owned by the Church, south of Birch Creek Elementary School and northwest of the Blue Sox baseball fields.

Detailed design plans for the three temples are still being developed. The Church also said further information will be made public later.

Groundbreaking dates were also not released and are reportedly still being set. Project leaders will soon start working with city officials in each location on preliminary plans for the temples, and leaders will be filing public documents in the coming months.

Utah has 27 temples announced, under construction, under renovation or in operation. In addition to the temple in Smithfield, temples have been announced or are under construction in Ephraim, Layton, Lindon, Orem, St. George (Red Cliffs), Saratoga Springs, Syracuse, Taylorsville and Tooele (Deseret Peak).

Providence man bound over for trial on charges of stealing $349,000 from grandchildren – Cache Valley Daily

Providence man bound over for trial on charges of stealing $349,000 from grandchildren – Cache Valley Daily