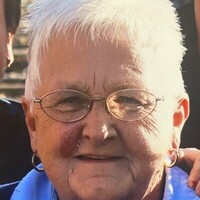 Sheila F. Clark, 72, longtime Malad resident, passed away on Friday November 19, 2021 surrounded by her family. Sheila was born on July 24, 1949 in Malad, Idaho, a daughter of Francis Marion and Vila Bell Facer. She was the youngest of five, and was raised and educated in Malad. She was a graduate of Malad High School. She married the love of her life, Ralph T. Clark, on Nov 11, 1972 in Malad. They briefly lived in Clarkston, Utah but later moved back to Malad, where they have resided since. Sheila was an avid bowler, and loved participating in local and regional tournaments. She was a long time La-Z-Boy employee where she made many dear friends. Sheila enjoyed camping with her family, and being outdoors.

She is survived by her two children; Shawn (Brenda) Clark of Tremonton, Utah and Sue Dawn Black of Idaho Falls, Idaho. Her grandchildren; Kayden, Jordyn, Rayden, MaKayla, Shawntay, Liam, and one great-grandson, Lynden.

She was preceded in death by her parents, the love of her life Ralph, and her three brothers and her sister.

Graveside services will follow in the Clarkston Cemetery at 1:45.