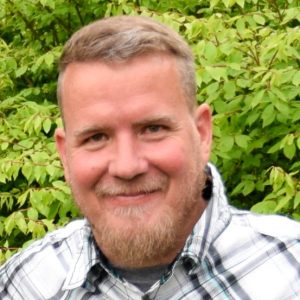 Shaun Doyle Howell—our beloved father, son, brother, uncle, and friend—passed away peacefully at the age of 45 on July 28, 2022, in Millville, Utah after a courageous seven-year battle with colon cancer. Not one to complain, feel sorry for himself, or be an imposition to anyone, he bravely and stubbornly faced his illness on his own terms with unwavering independence. Even in the hardest times, he never lost his amazing (and sometimes inappropriate) sense of humor. He had a tremendous will to live and was valiant to the end. He’s our hero.

Shaun was born to Clinton and Dixie Howell in Logan, Utah on May 14, 1977, the seventh of eight children. He had a sweet and quiet disposition right from the get-go and it stayed with him throughout his entire life.

In 1995, Shaun graduated from Mountain Crest High School. Phew! Following high school, he worked at a few different places before landing a job at Ashley Furniture, where he worked for many years up until September 2021. He had a strong work ethic and kept working even when he was very ill. He formed lifelong friendships during his time at Ashley, and he was especially grateful for his cherished friendship with Bobby Harris, who was like a brother to him.

The light and joy of Shaun’s life, his son Jaxson, was born in 2001. Shaun loved Jaxson deeply and unconditionally. He was so proud of him and all his accomplishments and once remarked that Jaxson is all he’d ever wanted.

Shaun was a kid magnet—his nieces and nephews flocked to him. At family gatherings, he was most often found holding a baby or playing with the children. He had the ability to break down walls and find instant connections with them, even if he hadn’t seen them for a few months.

In his younger years, Shaun enjoyed riding motorcycles with his friends. Later in life, he took up golf and loved it. More recently, playing online poker was a favorite pastime.

Shaun had many admirable qualities. He was honest, loyal, humble, generous, and selfless, just to name a few. He was also a huge tease and never passed up an opportunity to scare the daylights out of someone—especially if it was one of his sisters.

Shaun loved and respected his mother very much, and during these last difficult months, he would text her every night to let her know he was okay so she wouldn’t worry. That’s just the kind of guy he was.

He had a mischievous grin, hilarious giggle, and two fully functional middle fingers that loved the camera—we’re going to miss all that! He is so loved, and his passing leaves a large void in our lives. We’re better people because of him and we’re grateful for all the love and joy he added to our lives.

The family would like to express special thanks to Bobby Harris for his friendship and generosity over the years and to CNS Hospice, especially his wonderful nurse Holly.

Interment will be at the Millville Cemetery.

Memories may be shared with the family at www.whitepinefunerals.com.