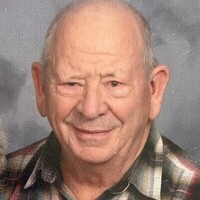 In the early morning hours, of April 20, 2022, Ronald Clark slipped peacefully away from this mortal life into the spirit world. He had been surrounded in recent days by many family members, neighbors, and close friends.

Ronald was born April 5 1933 in Cannonville, Ut. The oldest son of Wilford Kay and Laura Smith Clark, his 3 younger siblings are Ethel LaKay, Mary Carol, and Sheron Rand “Randy”. Throughout his childhood, his family lived in Cannonville, and Kanab Utah. During high school, he worked as an extra in the Western movies being filmed in those areas.

He joined the US Navy and served during the Korean War. He proudly served aboard the USS Bryce Canyon. After all, Bryce Valley was his home. After his honorable discharge, he worked at the power plant at the LDS Hospital in Salt Lake City Ut, where he met a student nurse, Patsy Andersen whom he married in the Idaho Falls temple. In March 2022 the two celebrated their 65th wedding anniversary.

Ron worked for FMC for 36 years Retiring in 1996. Retirement gave him more time to spend with his 10 Grandchildren. Candice, James, Thomas, Heather, Michael, Rochelle, Briana, Tyler, Joshua, and Melissa. All of the grandchildren loved when he would flood-irrigate the yard so they could play in the water and mud.

As an active member of The Church of Jesus Christ of Latter-Day Saints, he served in various positions in the church, including in the Young Men’s program, as a Home Teacher, the Coordinator of church service at the VA Nursing Home, the High Priest Group, and serving in the cafeteria and as an ordinance worker at the Idaho Falls Temple.

Burial will take place in the Arbon Cemetery at 2:00 p.m. where military rite is will be accorded.

Patsy, along with her daughters would like to thank All who helped with, and provided Medical care, for Ron: EnHabit Homehealth, Portneuf Cancer Center, extended Family, as well as the  Church and Community “Family” that gave of their time, support and provided transportation to appointments and events.