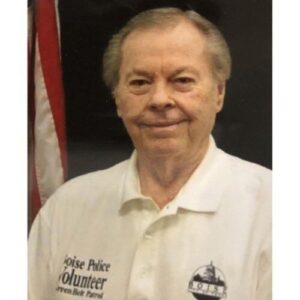 Robert M. Godfrey, age 89, of Boise, died peacefully July 17, 2021, at Edgewood Spring Creek Memory Care. Robert Godfrey was born on April 20, 1932, in Logan, Utah, to Eva and John Godfrey. After losing his father at the age of 12, Robert helped with his three siblings, Rosalyn, Louise, and David. Robert graduated from North Cache High School and then attended the University of Utah, Auburn University, and Utah State where he received his BA and MA. Robert was a lieutenant in the United States Air Force, and this took him to many places, including San Antonio, Houston, Denver, Mountain Home, and Tokyo, Japan.

It was in Mountain Home that he met his first wife, Lorraine Fischer, with whom he had three children. Robert was an educator and an administrator in the Boise School District for nearly three decades and influenced many students and teachers alike. In 1991, Robert married Vicky Ruyle and added three stepchildren. Robert enjoyed many hobbies including his 10 different motorcycles, photography, snow skiing, and bicycling. He was an avid Boise State Bronco fan and a football season ticket holder for many years with his son-in-law and grandkids. After his retirement, Robert volunteered on the Boise Greenbelt with the Boise Police, where he relished in the interactions with walkers, runners, and bicyclists. Robert was an important part of many people’s lives, and he will be greatly missed.

He was preceded in death by both his parents, his sisters, Rosalyn and Louise, an infant brother, Norman, and his daughter, Colette.

There will be a private family interment at the Idaho State Veteran’s Cemetery under the direction of Nampa Funeral Home, Yraguen Chapel.

An online guest book is available at www.nampafuneralhome.com

In lieu of flowers, the family suggests a donation in his name to the Boise Public Schools Foundation.