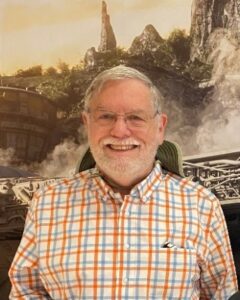 Rex D. Yarger continued his journey to the next realm on October 10, 2021. Rex was born March 28, 1952 to Dale and Irene Yarger in Pocatello Idaho. He was one of 5 children, he being the oldest. He was preceded in death by his youngest brother Shane and his son Steven and grandson Sawyer Anderson. He was married to Verna Jean Smith, daughter of Dick and Maxine Smith of Pocatello on July 2, 1969. Their marriage was later solemnized in the Washington D.C. Temple April 2, 1976, while serving in the USAF stationed at Wurtsmith AFB Michigan.

Rex Graduated from Pocatello High School in 1970. He attended Idaho State University for 2 years and various other universities finally receiving a BS in computer science from Utah State University In 1989. It took 19 years but he finally finished it.

Rex served in the US Air Force for 6 years from 1973-1979. He was assigned to 8th Airforce, 379th Bomb Wing of the Strategic Air Command and spent most of his service in Illinois and Michigan, working on the SRAM missile system, B52’s and FB111’s. He also worked as a nuclear munitions controller.

Rex was an active, proud member of the Church of Jesus Christ of Latter-Day Saints, serving in many callings and positions. He worked diligently in Family Search and provided thousands of names and ordinances to the temple. He loved serving and helping others primarily when no one knew he was doing it. He helped renovate and open the first LDS chapel in Oscoda, Michigan. Rex loved to take youth groups, family, friends and others rafting on the Snake River in Wyoming and could be found there on weekends much of the summer. He loved helping the widows and elderly until his health began to fail. Still, he always sought to help and serve others as health and circumstances would allow. Service to others was his main focus in his life along with church service and he was most happy when helping others, especially his family.

Rex’s home on 5th west was known widely as the Christmas house. Each year, assisted by family, he would set up an extensive computer-controlled Christmas light display synchronized to music for everyone to enjoy.

He worked at Thiokol, Williams International, and Autoliv for most of his career; primarily in electronics and automated control systems. Rex also spent many hours helping others with their computer problems.

Rex was always mindful and had a special place in his heart for those with special needs or disabilities. He made special effort to make them happy and cause their lives to be better and more self-fulfilled. He made special recipes for those who had food allergies so they wouldn’t feel left out or forgotten.

Finally, as Rex would say, “I will see you next year”.