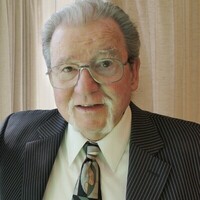 Ralph Lee Ferguson, 81, passed away Tuesday, May 3, 2022. He was born on August 18, 1940 to Hazel and Harry Ferguson in Pacific Grove, California. He didn’t enter this life alone, though, and was born a little after his twin, Richard. He grew up there with his four siblings, Jimmy, Carol, Richard and Kaysie. They were free range children, roaming the Monterey countryside.

Ralph joined the Navy in 1958 before graduating from high school and experienced life away from home. He was stationed in Washington and Japan and around the world. After leaving the Navy, he married his first wife and they moved to Las Vegas where they had a little girl, Lara, who passed away as a young baby. They were later divorced. Ralph started his career as a Vegas card dealer, working at the Horseshoe. Later he dealt blackjack at the Sahara the Desert Inn, Imperial Palace and finally at the Holiday Inn.

It was at the Sahara where he fell in love with a beautiful cocktail waitress named Marianne. They were married in 1974. Ralph once told his daughter that he thought he was in love with Marianne when he married her, but realized with each passing year that he previously didn’t know anything about love the more life and happiness they experienced together. They were good companions, except for sometimes in the car. He loved her very much.

Upon marrying Marianne, Ralph because an instant father. He adopted her son, Jesse Tucek, as his own, giving him the name Ferguson. A year after marrying Marianne, Cynthia was born. Ralph was a good dad wanting his kids to experience the fun things in life. They traveled often as a family to Monterey, Germany, and to many national parks. He tried to teach them to golf or play pool and always encouraged them to learn new things.

Ralph and Marianne would travel to Europe together as often as they could. Ralph could frequently be found trying to learn how to speak German, Marianne’s native language. He never quite became fluent.

As bad as he was at speaking German was as good as he was at playing pool. He played on many teams in Las Vegas and even won a few state championships. He was known amongst the Las Vegas pool scene by the nickname “The Hammer.” You could always tell if he was in a good or bad mood depending on how loud the pool cue cracked the ball.

Ralph liked to dabble in many hobbies from astronomy to ping-pong to making his own pool cues to learning to play guitar. His bookshelf was filled with how-to books. He enjoyed fixing things and also enjoyed keeping the things he couldn’t fix.

Ralph and Marianne retired to Lava Hot Springs where they found a new group of friends within the Church of Jesus Christ of Latter-Day Saints and at the local senior center. Ralph enjoyed the company of the people they met there and loved the land they lived on. He enjoyed living by the creek and spying the many animals out his back window.

Ralph was finally blessed to have grandchildren in his later years and liked nothing more than to hear how they were doing. To learn about their new hobbies, ask how they were doing in school and supported them in all their endeavors. He loved to video chat with them and especially loved how much they loved to eat garlic bread when they came to visit.