LOGAN — The chief of police for North Logan and Hyde Park has resigned suddenly after being arrested for driving under the influence last month. North Park Police Chief Ulysses M. Black tendered his resignation Friday afternoon, two weeks after being placed on administrative leave. 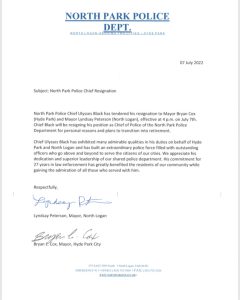 A joint letter from Lyndsay Peterson and Bryan Cox, North Logan and Hyde Park mayors respectively, stated Black was resigning his position as Chief of Police for personal reasons and planned to transition into retirement.

Court records show, Black was arrested June 18 in Fremont County, Idaho, following a traffic stop. He was released after posting $2,000 bail and charged with one count of driving under the influence, a misdemeanor.

Following his arrest, Black reportedly met with the mayors of both communities and was immediately placed on administrative leave.

Black has been in law enforcement for over 27 years. He graduated the police academy in 1994 and was first hired as an officer with the Willard City Police Department. He later moved over to the Box Elder County Sheriff’s Office, where he served as a deputy until 2001, when he joined the North Park Police Department. He first served as a patrol officer and then an investigator, before becoming chief of police in January 2020.

Peterson and Cox wrote, “Black has exhibited many admirable qualities in his duties on behalf of Hyde Park and North Logan, and has built an extraordinary police force filled with outstanding officers who go above and beyond to serve the citizens. We appreciate his dedication and superior leadership of our shared police department.”

In an interview with KVNU, Peterson said she considered Black a friend and was heartbroken about the news. The chief had built a great department and had a spotless record.

Cox echoed similar praise, telling KVNU that Black had been an outstanding chief and taken the department to a new level.

Peterson said the North Park Police Commission, made up of city leaders, citizens and law enforcement personnel, will be meeting next week to begin the process of hiring Black’s replacement. In the mean time, Assistant Chief Justin Olsen will serve as interim chief.

According to court records, Black has hired an attorney to represent him in the DUI case and pleaded not guilty to the charge. He is scheduled to appear again in Fremont County Magistrate Court in St. Anthony, Aug. 3.