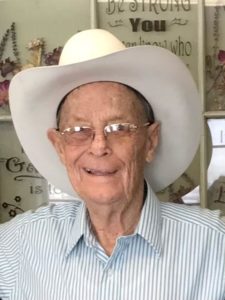 Merrill was born October 28, 1924, the second of three sons, to Whitney and Hazel (Gardner) Transtrum. He was raised in St. Charles, attended St. Charles Elementary, and graduated from Fielding High School in 1943.

Merrill and Joyce made their first home in St. Charles, Idaho and moved to Montpelier, Idaho in 1953, and throughout Merrill’s career with the Union Pacific Railroad lived in Pocatello, Idaho; LaGrande, Oregon; and Idaho Falls, Idaho.

After Merrill retired in 1984, they made their primary home on their ranch in St. Charles and spent their winters for the next 25 years at their home in Yuma, Arizona. In 2008, they settled in Montpelier.

Merrill honed his life-long work ethic as a child on the family ranch, where he also found plenty of time for mischievous fun with his brothers. After he and Joyce were married, they lived in a tiny house with no indoor plumbing and a single light bulb. Merrill bought them their first stove by trapping muskrats. He was always hands-on and was an innovative problem-solver.

Merrill joined the United States Army in 1945 and was deployed to Japan following the bombing of Hiroshima. When he returned to the US, he said, “My dad had bought a milking machine, so I was out of a job.” He worked ranching and construction jobs until he hired on to the Union Pacific Railroad. He started out as a fireman, was promoted to an engineer, then was promoted to a Road Foreman of Engines, and retired as a Train Master. After retiring from the railroad, Merrill kept busy on his ranch, traveled the world with Joyce, and enjoyed life in his retirement community in Yuma, where he made many friends. He was active in the LDS Church.

After he lost his beloved wife, he remained at home and lived an independent life until he made the decision to move into Bear Lake Manor. He enjoyed his last years at the Manor to the fullest. There he made many new friends and loved and appreciated the exceptional care he was fortunate to receive there.

Merrill is fondly remembered for his many accomplishments, acts of kindness and generosity, sense of humor, and astonishing memory. He enjoyed countless friendships and could always make a connection with anyone he encountered.

He was preceded in death by his beloved wife, Joyce; his parents; brothers Daurel and Wayne; and a daughter-in-law, Denice Transtrum.

Interment will be in the St. Charles Cemetery.