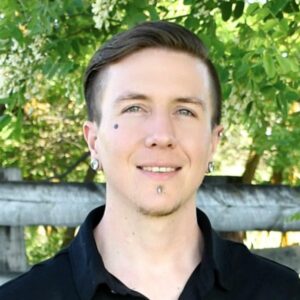 James attended Mountain Crest where he excelled in Wrestling. He was able to be part of Mountain Crest’s first state championship ring as a freshman. Out of the 21 matches he won, he pinned 19 of them. He received the Dedication Award for wrestling that year. He enjoyed baseball and having his dad coach him. His pony league team took state. He was involved in the scouting program and loved the adventure of the camp outs.

He loved art, music, and poetry. He wrote many beautiful poems as a way to express himself. He was a very compassionate, loving soul. James took pride in being able to complete a half marathon and later the Top of Utah full Marathon in 2012. He was a hard worker in whatever he put his mind to, and was currently working at Cytiva. Over the years James has made many supportive friends who were cheering him on. He was loved and adored by many.

James found solace in hiking, skiing, camping and being in the mountains. A favorite vacation for him was to go to Yellowstone and spend time with his family there. Warm days in St. George and California also brought him happiness.

July 19, 2014, James married Alicia Lerwill. Out of that union came Race “Ian” Lowe. They later divorced but remained good friends as they co-parented their beloved son. James was a very dedicated and proud father. Ian was his life. They enjoyed fishing, hiking, camping and running together. They loved to snuggle.

He is survived by his soon to be six year old son, his parents, his sister Chelsea (Rodney) Tripp, his grandmother Pamela Lowe, many aunts, uncles, cousins, a niece, and nephew. He was welcomed in heaven by his grandfather, Martell G. Lowe, and grandparents Ira D. Jardine and Margaret F. Jardine.

We love you and will miss your handsome smile and contagious laugh. You will live on in your son, and your loved ones. Until we meet again!

Following the viewing, there will be a graveside service at the Paradise cemetery. 8940 S 340 E.