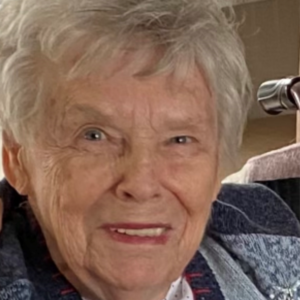 Marta Emma Schulz Koerber passed away peacefully on Friday, September 3, in Logan Utah, at the age of 86. She was lovingly surrounded by family, with her two daughters by her side.

Marta was born on January 2, 1935 to Gregor and Emma Schulz in Briesenitz, Germany. She was the sixth of seven children. They lived a peaceful life in the countryside on the family farm until the invasions of WWII reached their area in 1943.

When Marta was 9 years old, the Russian Army came and took over the home and farm. Emma, her mother, was able to help the smaller 3 children, including Marta, and the oldest daughter Lena escape. They rode through the night on a horse and cart to Berlin, where they lived with relatives and attended school. In 1945, after a long year apart, they reunited with her parents and other siblings. They all lived happily together once again in a two bedroom house, where all seven siblings shared a single room.

Shortly after, circumstances required the children to seek additional work and housing. Marta, at 15 years old, found a job cleaning at a nearby housing facility. She was relieved to move on and find employment with an American Colonel in the United States Military. She cleaned their family home and nannied for the children. It was there she learned her first few words of English.

Standing on a corner by the train station, she caught the eye of an American soldier, David Koerber, who was the driver for the General in the area, they began dating, and after a brief courtship, David returned to the United States and Marta followed him shortly after. She stepped off of the plane in Los Angeles, where David was waiting, and drove straight to Las Vegas where they were married on November 25, 1956. She worked hard towards her U.S. Citizenship, and was so relieved and happy to receive it in 1970.

Marta and David made their home in LaHabra, California where they raised their 5 children, and gained many life-long friends. Marta was a busy stay at home wife and mom. She constantly worried about the well being of each and every one of her kids, and worked hard to provide them a good life. She was very proud of all of them. The best way she knew how to serve was by making sure everyone around her was comfortable at all times. This included making her famous sandwiches on rye, homemade nightly meals, delicious desserts, and the best sleeping arrangements possible. She was an incredible seamstress; who blessed others often with handmade gifts and clothing. She always grew wonderful berries, fruit trees and rose gardens. Marta loved camping trips and the time spent together as a family on their annual vacations, especially Hume Lake.

She was raised a devout Catholic, and was a woman of faith throughout her life. She shared many wonderful traditions from her German heritage and faith that will be passed on throughout the family for generations.

Marta enjoyed her later years in Banning, California, where she met new friends and enjoyed playing games, attending parties, and socializing with her “German girls”.

She loved it when her family came to visit, and had a special place in her heart for her grandchildren and great-grandchildren, even teaching them special German nursery rhymes from her childhood.

Marta is preceded in death by her parents, her husband David C. Koerber, two sisters and three brothers.

The family would like to thank the many friends that became her family over the course of her life. Thank you Lynne, Pat, Shirley, and all of the “Painter Street” girls. The family would also like to thank the staff at Maple Springs for their kind and loving care these past (almost) five years, as well as Sunshine Home and Hospice for their tender care over her last few days.