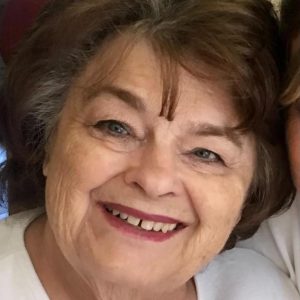 Marilyn Kay Peart returned to her Heavenly Father on June 13, 2022. She died peacefully at home, surrounded by family.  Marilyn was born September 16, 1939 in Wauwatosa, Wisconsin to Casper and Caroline High. She later moved to Milwaukee, Wisconsin and, after graduating from Milwaukee HIgh School, moved to Provo, Utah to study at B.Y.U. In Provo she met Charles “Chuck” Peart and the two were married on July 17, 1963. On November 14, 1981 Marilyn and Chuck were sealed in the Oakland California Temple of The Church of Jesus Christ of Latter-day Saints. Marilyn and Chuck were blessed with a large and loving family. Together they shared nine children, 15 grandchildren and four great-grandchildren. Through Chuck’s work they lived in Japan and in many different states throughout the U.S. including Hawaii, Florida, New York and California. After his retirement they settled in Nibley, Utah.

While living in Japan, Marilyn developed her talents as a painter and pianist. Home was often filled with the music she would play and her beautiful oil paintings have become family treasures. She helped her children and grandchildren learn to love art by sitting around the table with them and teaching them to draw. Later in life she used her artistic skills as a volunteer by creating large works of art for the annual Nibley Heritage Days Festival.

Marilyn was a faithful member of The Church of Jesus Christ of Latter-day Saints and served in many callings. She loved to teach in Primary. She had a special way of connecting with the children she taught. Marilyn also served as Relief Society President in the Owego, New York branch where she was always ready to act on the Lord’s errand. She and Chuck also served as missionaries in the Bishop’s Storehouse.

Marilyn was preceded in death by her beloved son, Tracy.

She will be greatly missed by her grandchildren, great-grandchildren, siblings, cousins, and dear friends who knew and loved her.

A family graveside memorial service will be held Friday, June 17, 2022 at the Millville City Cemetery at 10:00 a.m.