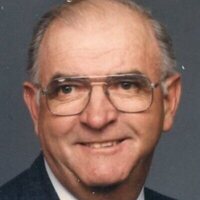 Khalil Scott, 94, passed away peacefully Tuesday, June 1, 2021, due to age-related health challenges and a broken heart from the loss of his dear wife Patsy Scott, just 7 months prior. He was always asking about how she was doing and hoping that she was OK till he was able to join her. Khalil was born the 29th of November 1926 in Gwenford (a little community between Pleasant View and Samaria), Idaho. He was named Khalil, which was the name of the County Assessor, an honest man in the community. Khalil always taught his family to honor their name and never do anything that would bring dis-honor to their name. He was the sixth of ten children of George Milton Scott and Naomi Roderick. They moved to Pleasant View when Khalil was just 2 years old. His mother died during childbirth of his sister Laura. His dad was just 43 with four children at home but was always able to keep the family together.

Khalil shared that he went to school in Pleasant View and liked math the best and was the Valedictorian of the 8th grade! They had a rhythm band and his teacher held up Khalil’s hand to lead, but as soon as she let go, his arm would fall, so she gave the stick to Donna Gayle Thomas and gave Khalil the cymbals. When she pointed to him, he would hit them together. That was his music career. He enjoyed boxing and never lost a boxing match in the Malad gym. He joined the football team his last year of school in order to prepare himself for the Navy.

He entered the service when he was 17 years old in order to serve in World War II. He served in the South Pacific, Philippines, and shores of Japan on an ammunition ship. At the end of World War II, he served as an armed guard on a Navy ship at the Battle of Alcatraz where two guards and three prisoners lost their lives. As far as we are aware, he was one of the last surviving World War II veterans raised in Malad that served in an active war zone.

His first date with his eternal companion, Edith (Patsy) Price was on Easter of 1947. They were engaged December 25th the same year and married December 2nd,1948 and celebrated 71 wonderful years together without a cross word spoken between them. After getting married, Patsy and Khalil lived in Malad for a short time before moving to Pleasant View in September 1949. Following the loss of Khalil’s mother in childbirth, they took on the care of three of Khalil’s siblings. Their family grew further with the addition of six children of their own: Tom, Dan, Bryan, Tim, Blaine, and Sherrie.

Scott Service was established in 1927 by his father George Milton and was continued with his brother Larry and then Khalil when he returned from World War II and continues to be a business in the community today. Khalil has continued to change the services provided to meet the needs of his customers. Services provided over the years has been pumping gas, grain bin construction, medical oxygen supplier, industrial oxygen provider, farm equipment sale and repair, small engine repair, gate and feeder panel construction, and just about anything else that was needed by the local farming community.

Khalil was an active member of The Church of Jesus Christ of Latter-day Saints and served faithfully in many positions in the Pleasant View ward. He said, “when I was baptized, I skated up to the Warm Springs, just West of our house, was baptized by Willard Bailey, and then skated back home.” He always wanted to serve a mission with Patsy, so they served a stake mission for 2 years and then served in the Logan Temple for an additional 4 ½ years. Khalil served in the bishopric for 10 years, Scoutmaster, Sunday School Superintendent, Executive secretary for 17 years and received an award for Outstanding Service to Boys. When Khalil was called to the bishopric, he was asked to give up his license to sell alcohol in order to serve. At the time, it was over fifty percent of their income. Many told them that they would not survive the loss of income. Additional business opportunities came where they were needed, and the business continues today.

The family wishes to express appreciation to the relatives, friends, and customers of Scott Service for the past 94 years. Because of you, we’ve had the opportunity to meet many great friends. We want to express our love and appreciation to all of those who have been in our home to care for our father. Special thanks to Brittny Hubbard, MaRee Carter, and Missy Albretsen who we grew to love and appreciate. We have felt your love, your care, and will be eternally grateful for the dignity you helped us provide dad during the final days of his life. Dad would have wanted us to also thank the many young men who came in their home each Sunday to bring the sacred emblems of the sacrament. You have made a significant difference in the lives of our family, and the way you fulfilled your Priesthood duties will never be forgotten.