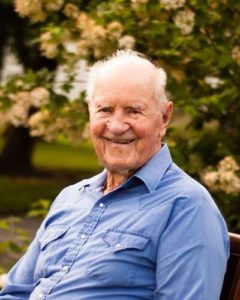 The oldest of four children, Morgan moved with his parents to Rigby, Idaho when he was two years old.  He attended school in Rigby and shortly after high school graduation married his sweetheart, Velma Walker.  They were married 74 years before her death in 2008.

A stalwart of the Rigby community, Morgan was best known as a postal worker and later post master in the Rigby Post Office for more than 40 years.

After retiring from the Post Office at age 65, he became a real estate broker with Archibald Real Estate Agency, actively involved in that profession for the next 15 years.  He served on Rigby’s Zoning and Planning Commission for several years, was a member of the Rigby Lion’s Club and the Upper Snake River Sportsman’s Association.  He was instrumental in introducing white tail deer to Eastern Idaho.

During his spare time, he remodeled old homes and prepared them for rent or purchase.  He was still working on his last “project” house at 102 years old, doing much of the work himself.

He was a member of the Church of Jesus Christ of Latter-day Saints, serving in various capacities including Scouting.

He loved gardening, especially caring for his prize roses that people traveling along Annis Highway admired every summer.  For more than 25 years, he joined extended family members for a salmon fishing trip to the Washington coast, something he looked forward to throughout the year.

He was preceded in death by his wife Velma, an infant child, and a brother Dee Lake.

Interment will be in the Rigby Pioneer Cemetery.

Condolences and memories may be shared with the family at Eckersell Funeral Home.