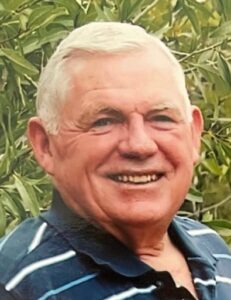 Hunter Winford Barrus passed away peacefully on April 17th, 2021 after suffering a stroke one week prior to his death. He is preceded in death by his parents, Windford and Orlean Barrus.

Hunter was born on June 11, 1945 in Tremonton, Utah, where he enjoyed a happy and adventurous childhood with his five siblings who survive him… Melvin (Melodee), Emma Jean (Bryan), Jodie (Soni), Marilyn (Ron), and Tim (Cleo).

Hunter served a mission for the Church of Jesus Christ of Latter Day Saints in the Central Atlantic States Mission before meeting his wife, Janice Blaisdell, while attending Ricks College in Idaho. They were married on June 21, 1968 in the LDS Logan City temple for time and all eternity.

He gave six years of service as a staff sergeant E6 in the Army National Guard before graduating from Utah State University in Physical Health Education. Hunter enjoyed a lengthy career as a teacher, coach, and athletic director at his alma mater, Bear River High School. He loved the lifelong connections that he made with his students and cherished being a part of their growth and development.

After his retirement, he served another mission with his wife in the Pennsylvania, Pittsburgh mission (Punxsutawney). Hunter actively enjoyed several hobbies including woodworking, flyfishing, boating, camping, and genealogy.  Hunter’s highest priorities were the Gospel of Jesus Christ of Latter Day Saints and his family.

He is survived by his wife, Janice Blaisdell, his children, Nikole Nilson (Troy), Tyler Barrus (Amber), David Barrus (Jamie), and Wade Barrus (Amber). He and Janice have 12 grand kids and one great grandchild.

Funeral Services will be held Friday April 23, 2021 at 11am at the Riverview LDS Church.

The service will be live streamed here and may be found at www.ruddfuneralhome.com under his obituary.