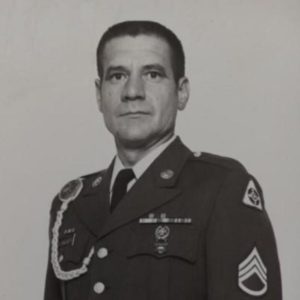 Henry Edward McCracken, 77. Born December 2nd, 1944 in Salt Lake City, UT. Son of Luther S. and Delsa H. McCracken. Passed away quietly on July 16th, 2022 at his home in Moriarty, NM. After a long battle with cancer. He graduated from Ogden High School in Ogden, UT. He was a loving husband to Deanna S. McCracken and caring father. Henry was liked and loved by many.

He was proceeded in death by his parents Luther S. and Delsa H. McCracken. His brother Luther S. (Susan) McCracken Jr.

Henry leaves behind several grandchildren, great grandchildren, nieces, nephews and many life-long friends. One in particular Lei Kanoho whom he met while stationed in Hawaii. Henry Edward (“Edd” or “Mac”) McCracken served our nation with honor for 40 years. He received many medals and awards. He served in the US Air Force, US Marines, US Army and US Army Reserves. While in the service he was stationed in Hawaii, Okinawa, Germany and Stateside. While in the Military Henry proudly served as an MP (Military Police). He came out of retirement to help re-write the training manual for the Military Police Reserves. Before finally settling in Moriarty, NM. His many jobs included taxi driver, heavy equipment operator, long-haul semi-truck and bus driver, salesman, volunteer firefighter, and most notably US Postal Service worker for 20 years in Moriarty, NM where he became a community icon. He enjoyed raising bassets, peacocks and many other animals and adopting senior rescue dogs. He was a member of various pigeon clubs. He loved visiting their many friends they acquired in the 40 years they lived in Moriarty. With a friendly smile he was always ready to lend a helping hand to those in need.

His family wishes to pass along a special thanks to Shelly (Nurse) and Jesse (OT) Home Healthcare (Ambercare). To Renata and Patrick (Nurses) Hospice (Ambercare). To his team of doctors at the VA and UNMH. Dr. Spencer, Dr. Ho, Dr. Last, Dr. Martinez, Rikki Armstrong, the staff in Pallitive care Trina and Dr. Lunz and many others.

Viewing will be held August 22, 2022 at Nelson’s Mortuary in Smithfield, UT from 1:00 p.m. to 2:00 p.m. followed by graveside services at Smithfield Cemetery at 2:30 p.m. where he will receive Military Honors.

In lieu of flowers, the family requests that donations be made in his name to Animal Humane New Mexico, 615 Virginia St. SE, Albuquerque, NM, 87108-4228.