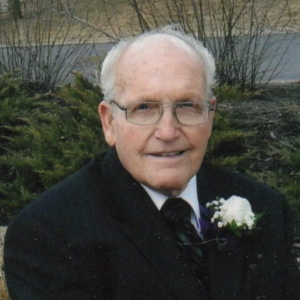 Gordon J Seamons passed away peacefully on 8 Jan 2022 at the age of 93. Gordon was born in Mink Creek, Idaho to Melvin and Leora Jepsen Seamons. His mother later married Wesley A. Biggs whom he was devoted to and called “Pappy”.

Gordon graduated from Preston High School and attended USU Agricultural College. He married Mary Swainston and was later divorced. A daughter was born from this union.
Gordon joined the Navy and served 4 years during the Korean War. Shortly after he returned home, he met and married Jacqueline Hanson. They were later sealed in the Logan, Utah Temple.

He worked as a lineman for Mt. Bell. They moved to Paradise Utah in 1965 with their 5 children and put down deep roots. Gordon retired from the phone company and spent the next few years with Jackie traveling to Quartzsite, Arizona.

Gordon enjoyed snowmobiling and volunteering with the Rolling Phones. Everyone in Paradise knew “Grandpa Gordy”.  He was an active member in the Church of Jesus Christ of Latter-day Saints. He served in a wide variety of positions, but he loved primary best.

Gordon was preceded in death by his parents, his wife Jacki, one grandson, and two great grandchildren.