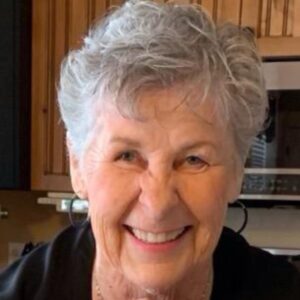 Garlande Ann Phipps, from Wellsville, Utah, left to join her loving husband, Mom, and Dad after a nearly 5-year battle with cancer early Saturday morning on May 07, 2022. Garlande was born on January 07, 1940, in Glenwood Springs, Colorado to Orville Clifford Sims and Jessie Marie Hight. Orville and Jessie Marie met and married in Utah in 1933. They moved to Burbank, CA in 1941 where Orville made wooden interiors for aircraft in WWII. They moved to Oakdale, CA in 1946. Garlande was one of five children: Teddy Jean Jaspar, Oakdale, CA, Cherri Gallant, Sonora, CA, Jan Sims, Colorado, Nemphes (Bud) Denton Sims, Los Angeles, CA.

Garlande met her eternal sweetheart Stanley Ross Phipps when they were sophomores at Oakdale High School. She cheered her sweetheart on playing Football, Baseball, and Basketball. She also played the cymbals in the marching band. Stan always loved listening to marching bands because he was so proud of her. Garlande loved her family, and her passions in life were crocheting beanies for all the children and grandchildren every Christmas, writing poetry, reading the scriptures and Gospel related books. She loved camping and going fishing with Stan.

Stan and Garlande were both baptized into the LDS Church at 21 years old. Garlande held many callings and was always diligent and faithful. Her absolute favorite calling was going on a mission with Stan to Eugene, Oregon. All their free time was spent going to ball games, swimming at Woodward Reservoir, and camping at Pinecrest Lake, Kennedy Meadows, and a trip to Canada. The most memorable was Utah in a ’64 Station Wagon with Stan, her four children, Teddy and her son Glee, where they broke down in Winnemucca, Nevada and ate naked bologna sandwiches and all piled into one hotel room.

Garlande drove bus #3 for 25 years and was loved by all the children. She was still receiving cards, emails, and text messages until the day she passed from those children 40 years ago.

The family would like to thank Sunshine Hospice, and the nurses Sarah, Mindy, Kennedy and Brooke for the wonderful care given to Garlande.