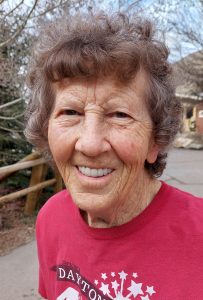 Elva K. Atkinson, 86, passed peacefully away July 15th, in Dayton, Idaho. She was born on March 24th, 1936 in Fairview, Idaho to Elmer Leishman and Margaret Bailey Kerr. She was the eighth child of nine children.

Elva graduated from Preston High as Salutatorian in 1954 with awards and scholarships. She attended Heneger School of Business in Salt Lake City and graduated with top honors. In 1959, Elva left to serve the Lord in the West German Mission. She loved the German people and her mission memories. In 1961, Elva enrolled at BYU. During this time, she met Sherwin Joseph Atkinson. They had wonderful dates together, including attending the temple. One night after a session, Sherwin slipped a ring on her finger in the sealing room. On December 13, 1963 they were sealed for time and all eternity in that exact same sealing room in the Logan Temple.

They moved to Dayton and loved living on their 47 acre farm. They enjoyed gardening, canning, hiking, biking, swimming, skating, backpacking, skiing (snow/water) and cats. They were always rescuing stray cats that Sherwin found at USU. After ten years of marriage, they were able to adopt Diane and later Linda and Ivan. They were so happy to finally be parents and have the family they had always dreamed of.

Elva believed so strongly in the Gospel and has been faithful and honored all her church callings. Her Primary children, youth and scouts will forever hold a dear place in her heart. She loved her Dayton community so much and it was her pleasure to work for the City of Dayton as the City Clerk for 39 years. Elva was passionate about life and serving anyone around her. She would drop whatever she was doing to support a family member or friend. She spoke kindly of everyone and wanted to live a life worthy of our Heavenly Parents so she could be reunited with her beloved family members and friends who have passed on.

Condolences and memories may be shared with the family at webbmortuary.com.