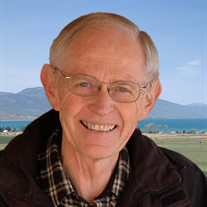 Dr. Charles Ray Ashcraft passed away on May 17, 2021 in his home, his wife of 55 years at his side. Charles was born to Samuel Ray Ashcraft and Elna Carolina (Carlson) on January 28, 1943 in Tremonton, Utah.

After serving in the Florida mission, Charles married Nina Marian Robinson on February 11, 1966 in the Logan Utah Temple. He earned a PhD in Material Science and Engineering from the University of Utah. Charles was successful in the flexible packaging industry, inventing packaging for many products. His hobbies involved creating and building.

He served faithfully in the community as well as in The Church of Jesus Christ of Latter-day Saints, including as a temple ordinance worker.

Funeral service will be held at 11:30am.