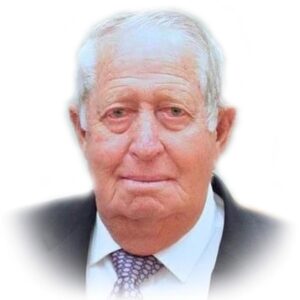 DeVon Ray Mathews, husband, father, grandpa, great-grandpa, brother and friend passed away peacefully in his home surrounded by his family on August 7, 2021 at the age of 78.

DeVon was born September 24, 1942 to Ray Winn Mathews and June Jenks Mathews of Providence. He was the 2nd of three children with sisters Jolene (Dean) Shaffer and Debbie (Todd) Brown. He graduated from South Cache High School in 1960 then served in the Army Reserves until 1967.

On January 10, 1964 he married the love of his life, Diane Hulse Parker, of Wellsville. Their marriage was later solemnized in the Logan temple. They were blessed with three children: Darrin (Lisa) Mathews, Ross (Kristy- deceased) Mathews, and Trena Mathews. They started their family in Providence while DeVon worked for Wilson Motors for 2 years.

In 1970 they then bought a home in Wellsville to raise their family. In March 1965 he started working for LeGrande Johnson Construction as a grade checker traveling throughout the states of Utah, Idaho, Wyoming and Nevada.

In 2001 he retired so he could spend more time with his wife, children and grandchildren. Devon enjoyed hunting and camping with his family and soon after retirement began fishing with friends.

He was preceded in death by his parents Ray and June Mathews and daughter-in-law Kristy Mathews.

A viewing service will take place Wednesday, August 11th, from 6 to 8 pm at Allen-Hall Mortuary, 34 East Center Street in Logan.

Graveside services will be held Thursday, August 12, 2021 beginning at 11:00 AM at the Wellsville City Cemetery.