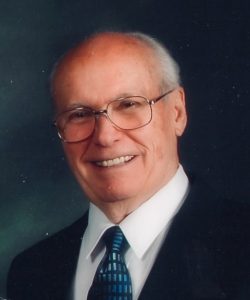 Our dear husband, father, grandfather and great grandfather, Dale Thomas Johnston passed away on June 11, 2022, after an 18-month battle with cancer. He was born in Ogden, UT, on September 10, 1934, to J. Therald and Afton Johnston and was raised in West Point, Utah. Dale attended Davis High School where he enjoyed drama, playing saxophone in the band and cheerleading. Their regular “Class of 1952” reunions were a highlight for him. He married his high school sweetheart, Norma Jeane Page, on November 28, 1953, and they were later sealed in the Salt Lake Temple on October 6, 1954. They have been inseparable for 68 years.

Living in Ogden, Dale joined the National Guard, attended Weber State College (more cheerleading!) and worked as an X-ray Technician at the old Dee Hospital before hiring on at Thiokol in 1959. The couple moved to Perry where they raised 4 children and have lived there ever since until recently moving to assisted living in South Ogden. Starting as a QC technician x-raying missile casings, he worked his way up to Test Operations Manager at ATK/Thiokol where he retired in 1994. As a “Maverick Engineer”, his attention to detail, practical knowledge, and problem-solving skills were hallmarks of his professional career.

Dale was a faithful member of The Church of Jesus Christ of Latter-day Saints with a firm testimony of the plan of happiness. He served in a variety of callings including bishoprics, scouting, and family history. He and his eternal companion enjoyed serving a full-time mission together in Boston, Massachusetts, and frequently attended the Brigham City Temple. Dale enjoyed golf, photography, and spreadsheets! When asked recently what meant the most to him, he replied without hesitation that it was the love of his family. He expressed that love in word and deed. He always said, “Things don’t matter, people do.”

He is survived by his wife, Norma; children: Lindy (Cindy), Tom (Mary Jo), Sheri, and Rich; 15 grandchildren and 32 great-grandchildren.

He was preceded in death by his parents and brothers: Lewellyn and Lamar.

As a family, we express our gratitude to the physicians, nurses and caregivers who have been so kind.

The service will be live streamed on Dale’s obituary page at myers-mortuary.com where condolences to the family may also be expressed.