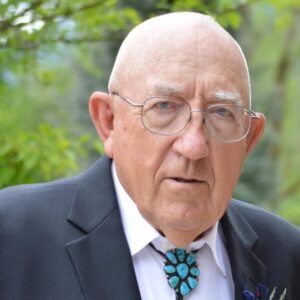 The adventure began for Chad Joshua Stevens in the Four Corners region of Southwest Colorado on September 3rd 1932, the 6th child of Daniel and Virga Stevens. He began life as a premature, “blue” baby. After being given no hope by the doctor, Chad was given a blessing and he was dedicated to the service of our Heavenly Father. He would end up living and working in all four States within a radius of 100 mile from where his Grand Father and Great Uncle helped carve the Hole In the Rock Trail, just 50 years earlier as part of the Pioneer Migration. Although Chad was unable to serve a full-time mission, he has served the Lord his entire life. Throughout his military service, Chad’s journey took him throughout the Western United States, Hawaii and all of the Northern Pacific; with stops in the Philippines, Korea, Japan, Alaska and the Arctic Ocean.

Chad’s adventures started early in life when he got to live in caves as a toddler as his father tried to establish a farm during the Depression in Southeast Utah. He enjoyed telling of being a modern day caveman. Chad was baptized in an irrigation ditch after they broke the ice off the water. Then it was on to Northern Montana for the rest of the 1940’s. Chad graduated High School in 1950, serving as Senior Class president, Student Body president, Boy’s State Officer and his favorite position, State Officer in the FFA (a coveted Blue Corduroy Jacket with all the Pins).

Chad met and married Ruby Jean Holden in 1954, in San Francisco, CA. Chad was selected for Salvage Diving School with training in Bayonne, New Jersey. As a Deep Sea Salvage diver after WWII and the Korean War, Chad traveled all over the Northern Pacific Ocean, patching up, refloating or sinking ships damaged in the wars. Chad and Ruby, were Sealed in the Hawaiian Temple, while stationed out of Pearl Harbor. Chad truly loved his time traveling to Ports all over the Northern Pacific Ocean; Hawaii, The Philippines, Taiwan, Korea, Japan, Vietnam and north to Alaska. Not only did he enjoy new places, but he loved the people. Chad experienced a multitude of different cultures. When he was able to spend time off the ship, he would visit the local communities and meet people. He had many experiences where he was guided and protected from harm. He never met someone he didn’t want to help and share the Gospel with. He came to appreciate how alike the people were as Children of the same Heavenly Father.

After an Honorable Discharge in 1956 Chad & Ruby returned to Northern Montana to start a life and family together on the family farm. The couple’s first child, Teri was born while in Montana. Farming in Montana was less than successful so it was back to the Four Corners to try something else. Something Else turned out to be selling and repairing Singer Sewing Machines.

Chad settled his young family this time in northwest New Mexico and started his next career as a sewing machine salesman and repairman with Singer Sewing Machines. Chad was always good with people and enjoyed working with his hands and he got to do both in his new profession. A son Jeff was added to the growing family at this time. Chad served as a counselor in the Ratone Branch of the Church of Jesus Christ of Latter-Day Saints. Chad was doing well as a salesman, he was transferred to Orange County, California. Here their last child was born, Tammy. Chad and Ruby’s family was now complete.

As the country prospered fewer clothes were being sewn at home and Chad made a lateral move into the women’s dress industry, moving to Logan, Utah, to be floor manager and sewing machine repairman at Mode O’Day (now the Utah Opera Festival and Theater). Among other callings, Chad served as the Ward Clerk while living in Logan. Over the next 13 years in the sewing business, Chad worked in Ogden, Salt Lake, and Vernal, Utah. Always faithfully fulfilling his many callings. He had to scratch that lifelong itch to be his own boss. After spending a couple of days working with his new brother-in-law, Lee Hendrix at a Thanksgiving family reunion in Tempe, Arizona, Chad moved his wife and children to Mesa, Arizona, to start a construction company that specialized in roofing. While in Mesa, Chad held callings as Sunday School Superintendent, Ward Clerk, and two Stake Missions. Over the next 18 years, Chad built Stevens Roofing, Inc. into the largest roofing company in the East Valley area. His company offered employment to many of his family members, as well as others.

At its peak, Chad employed over 50 people. When housing construction slowed, Chad began working on housing projects for Native Americans on many different reservations throughout Arizona. He ultimately concentrated on the Navajo Reservation, full circle back to the Four Corners region. This also fulfilled a promise in his patriarchal blessing, to work and minister to the laminite people. Chad loved his time working on the reservations. He had a love for the genuine spirit the people have. He spoke often of his years working and getting to know so many of them. Even in his last days, he would comment about them by name and wonder how they are doing. His success provided him an opportunity to purchase a small farm in Jerome, Idaho, with the thought of being a gentleman farmer. All the grandkids who came to call him PaPa, have fond memories of their farmer Grandpa. While in Jerome, Chad served in the bishopric and was also called to a Stake Mission.

Chad and Ruby retired to Malad, Idaho. Chad enjoyed building Ruby her second new house, right across the street from their son Jeff. Ruby could now enjoy the all-white living room she always wanted, without the manure from the farm. Living in Malad Chad was again called to serve a Stake Mission. This was a calling he enjoyed. He had the opportunity to meet people and watch the changes the Gospel brought into their lives.

Chad got a job with Dave Harris of Double H Farms as a hired man and finally got to be a part of a big successful farming operation with lots of work to do and none of the financial headaches and boy did he like to drive big tractors and combines. And Dave Harris is a great mechanic, and only complained a little, when Chad would break something. The partnership worked well until at 84 years old, Chad just could not climb the ladder into the big equipment anymore. Life catches up to everyone, eventually. With infirmities catching up to them, Chad and Ruby moved to Mendon, Utah to the home of their daughter Tammy to be looked after by both daughters, Teri Ballard and Tammy Hampton. Over the years, Chad would share the many experiences he had in his life. When his life was dedicated to the Lord, it must have come with a promise of protection. Chad was watched over all his life. He received prompting to leave when he was in unsafe places, he was protected physically when working hundreds of feet under water and was protected from harm while providing for his family. Chad also served the Lord by literally giving of himself. Over his lifetime, he gave more than ten gallons of blood to those who needed it. Having O negative blood, he was always needed. Many times, his family remembers when he would receive a call late in the evening asking if he could come right away, as there was someone in need of his blood. Of course, he always went.

When asked in the last weeks of his life what his greatest accomplishments were, Chad said it was his fine children that took care of him and his wife, good friends and his love of the Gospel of Jesus Christ.

Graveside services will be held Wednesday June 1, 2022 at 11:00am at the Mendon City Cemetery.

In lieu of flowers, consider donating to the missionary fund of The Church of Jesus Christ of Latter-Day Saints.