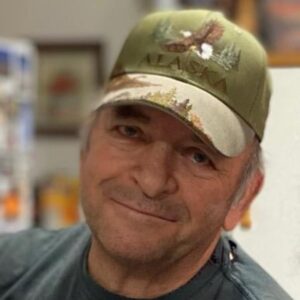 He grew up in Rockland, ID. He graduated from Rockland High School where he played football, basketball, and always boasted that he graduated in the upper 12th of his graduating class (because there were only 12).

After graduation Bruce tried to join the army but because his feet were so flat, he was denied. So, while brothers Brent & Troy were sent to Vietnam, Bruce was called to serve in the Northern Indian Mission for the Church of Jesus Christ of Latter-Day Saints. He served in Omaha, NE for six months and the remainder of his mission he served the people of Fort Thompson, South Dakota. He had a deep love for those he served and was adopted by the Voice family and made many trips to visit and kept in touch for more than 50 years. He loved the gospel of Jesus Christ and sharing it with those around him. He had many callings but especially loved his time as a teacher and a member of the branch presidency at Terrace Grove in Logan, UT for more than ten years. He taught us to attend all our meetings, magnify our callings and to look for service opportunities!

He attended BYU-Hawaii and Ricks. He was a heavy-duty mechanic for most of his life as well as rodeo clown, logger, truck driver, pineapple picker, baker, and welder. He made friends everywhere he went, never passed up a free hat, loved all things extra spicy, taught us how to work hard and make hotcakes. He was known for making homemade ice cream and loved sharing it. He loved jokes and had a knack for making them longer and longer. He loved identifying planes and helicopters as they flew overhead and on TV and in movies. He loved to travel and often told stories of his travels by plane, tractor trailer and long road trips. He loved pushing the limits of a pocket protector, fixing things, figuring out how things worked and how he could improve them.

In the spring of 1974 Bruce was set up on a blind date with Shauna Findlay and she agreed to go if they attended a Letterman’s Concert. They were married and sealed for time and all eternity in the Logan LDS Temple on December 7, 1974. They were blessed with 6 children. Kalani (Ryan) Mascherino of Tooele, UT, Konae (Chris) Putman of Chugiak, AK, Nathan (Vida) Moss of Perry, UT, Brian Moss(Andrea Rennie) of Baltimore, MD, Daemian (Brandy) Moss of Hyrum, UT & KaraLee Moss (Francisco Herrero) of Salt Lake City, UT. He was an amazing grandpa to his 18 grandchildren!

Bruce was proceeded in death by his parents, brothers Travis, Newell & Kay and granddaughter Nadia.

We are having a Celebration of Bruce’s life on the 11th of June (his 72nd birthday) at Bridger Park (1181 N 400 W, Logan) from 5pm to 8pm. We will be making homemade ice cream & rootbeer and serving pulled pork sandwiches. Please bring a side to share. Hope to see you there!