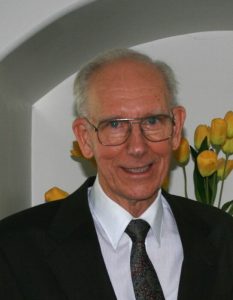 In 1941 the family joined the Church of Jesus Christ of Latter-day Saints, which profoundly influenced the rest of their lives. In 1946 Bill’s father passed away from cancer, and his mother remained a widow until her death in 1994.

In 1951, following graduation from high school in Winston-Salem, North Carolina, he enlisted in the U.S. Navy, where he became an aircraft electronics technician, assigned to an aircraft carrier serving in the western Pacific during the Korean war. Following discharge from the Navy in 1954 he enrolled at Utah State University in Logan, Utah, where he earned a degree in electrical engineering. There he met Jenna Lou Thompson and the two were married in the Logan LDS temple on June 9, 1958. From 1960 to 1970 they welcomed eight children into their family.

Following graduation from college in 1959, Bill took a job as an engineer with Sperry Corp. in Ogden, Utah, and the couple moved to Bountiful Utah. In 1961, Bill left Sperry and joined the inaugural MBA class at Brigham Young University, receiving his MBA degree in 1963, then taking a management position with Mountain Bell Telephone Co. in Salt Lake City.

In 1965 the telephone company transferred him to their Denver office, and the growing family moved to Littleton, Colorado, which became their home for most of the next 34 years. Bill worked for Mountain Bell and AT&T until early retirement in 1988, after which he worked several other jobs for about 10 years. In 1997-98 he and his wife served as full-time missionaries for the Church of Jesus Christ of Latter-day Saints in Baltimore, Maryland. Upon their return, they built a house in Perry, Utah in 1999, where they lived until 2016.

Throughout his life Bill set an example of hard work, diligence, and faithfulness in the Church, serving in many different leadership positions, including Bishop’s counselor, Elders Quorum Presidency, High Priest Group Leader, and ward and stake clerk. He took his family to see most parts of the US and travelled with his wife to many foreign countries. Out of all the things he did in this life, he considered his family to be his greatest accomplishment.

Interment will be in the Logan City Cemetery.