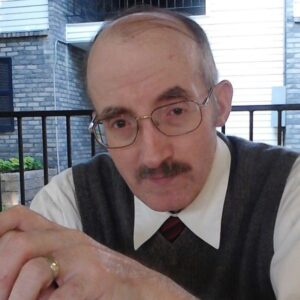 Van Eldon Johnston was born in Preston, Idaho (Franklin County) on January 22, 1953 and quietly passed away on February 12, 2021 in Mapleton, Utah.

He is the youngest child of Eldon Richard Johnston and Enid Woolsey Johnston. Van grew up in a quiet farming community, where mischief was aplenty.

He moved to Provo to attend Brigham Young University. He left after a year to serve a mission for The Church of Jesus Christ of Latter-day Saints in Los Angeles, California, where he learned Spanish. He kept it up his whole life and loved speaking it with others when he could.

After his mission, he moved to Boise, Idaho where he learned and fell in love with cabinetry, a passion he kept up his entire life. He later moved to Utah County, working as a cabinet maker and in a grocery store. It was in the latter that he met his future wife Terry.

They were wed on August 25, 1977 in the Provo Utah Temple. Soon after, they moved to Woodland, California where they made their home for over 30 years. In their 43 years of marriage, they had 6 children.

He is preceded in death by both his parents and older brother Dean Richard.

He is survived by his wife Terry, his children Eldon (Rebecca), Gaylene (Eric), Rebecca (Randy), Karen (Jason), Laura (Andrew), and Tamara (Stuart), as well as 11 grandchildren. He is also survived by his sisters Ana Louise and Elaine Enid.

A memorial service for the family will be held on Friday, February 19, 2021.

Burial will take place on Saturday, February 20, 2021 in the the Preston City Cemetery.

Condolences and memories may be shared with the family at Premier Funeral Services.