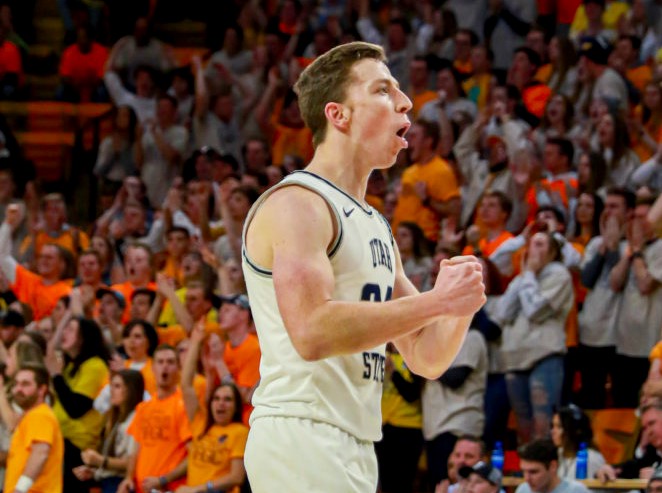 BOTTOM LINE: Colorado State seeks revenge on Utah State after dropping the first matchup in Logan. The teams last faced each other on Jan. 25, when the Aggies shot 59.2 percent from the field while limiting Colorado State’s shooters to just 37.3 percent on the way to a 77-61 victory.

VARYING EXPERIENCE: Utah State has been fueled by senior leadership while Colorado State has leaned on freshmen this year. For the Aggies, seniors Sam Merrill, Justin Bean and Diogo Brito have scored 49 percent of the team’s points this season, including 67 percent of all Aggies points over their last five. In the other locker room, freshmen Nico Carvacho, Isaiah Stevens and David Roddy have collectively accounted for 50 percent of Colorado State’s scoring this season and 53 percent of the team’s points over its last five games.

OFFENSIVE THREAT: Merrill has either made or assisted on 50 percent of all Utah State field goals over the last three games. The senior guard has 14 field goals and 20 assists in those games.

UNDEFEATED WHEN: The Rams are 13-0 when they make eight or more 3-pointers and 4-8 when they fall shy of that mark. The Aggies are 17-0 when they hold opponents to a field goal percentage of 42.9 percent or worse, and 2-7 when opponents exceed that percentage.

STREAK SCORING: Colorado State has won its last six home games, scoring an average of 89.5 points while giving up 71.8.

DID YOU KNOW: The stout Utah State defense has held opposing offenses to a field goal percentage of 39.3 percent, the 28th-best mark in the country. Colorado State has allowed opponents to shoot 44.5 percent from the field through 25 games (ranked 257th).