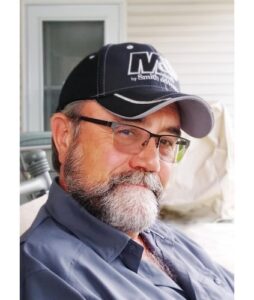 Steve was the type of friend everyone wanted to have. He showed passion, love, caring and forgiveness indiscriminately. Whether it was the newest baby in the family, or his oldest friend; he always showed up and was dependable.

Growing up in Hyde Park as the middle child of 3, he was a boy scout and loved being outside. He always loved camping, fishing, hunting and hiking. He graduated from Sky View HS where he was on the track & football teams. Although most notably, he played a stint as Gene Simmons from Kiss for the High School talent show which he breathed fire during, lit the auditorium curtains on fire and nearly burnt down the school. I’m sure he had no regrets.

His love for music grew after high school and his extensive music collection never stopped growing his entire life from 8-track to Spotify. He had it all and kept it all.

In marriage and family, he took on the roles with a sense of pride and responsibility. He worked hard and played hard. As his only two children, we grew up with everything we could want and all the support we could ask for. We are so proud of the things he taught us; either directly or through example. Being a grandpa (of 3) became his most cherished role as he always made time to make sure that his grandkids knew who he was and eagerly awaited his visits. He was loved by them unconditionally.

Steve recently retired from ATK Thiokol/Northrup Grumman in mid-July after working for 30+ years. The friends he made were life-long. As his family, we appreciated knowing he had a group of friends to be around as he worked hard to support us.

Steve was preceded in death by his dad Gary.

He is survived by his mom Deanna, his sisters Linda (Keith) and Susan. His daughter Eryn (Andy) Harrison and granddaughter Ayden, his son Ryan (Jamie) Morse, granddaughter Bonnie and grandson James.

A celebration of life is being planned in early October in lieu of a formal funeral service.

We appreciate all of the love and messages from all of those that know our family.